The shows will premiere starting March 14, 2022 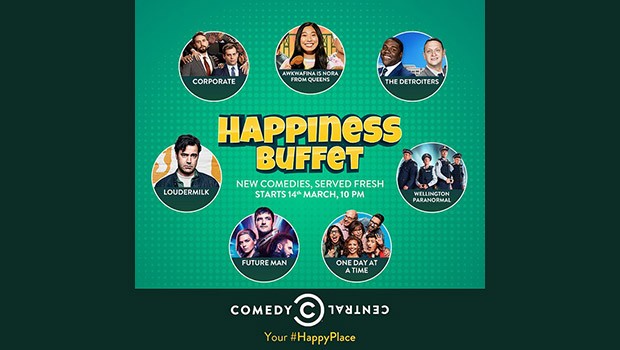 Viacom18’s English entertainment channel Comedy Central is slated to bring a slew of exciting new shows for its viewers starting March 14. The channel will extend its offering with new additions to its bouquet of shows.

The channel aims to deliver happiness under its campaign, “Happiness Buffet - New Comedies, Served Fresh”. It is prepared to engage its audiences with some of the most comical, whimsical and funniest shows every weekday at 10 pm, starting with ‘Corporate’.

From series premieres featuring Emmy winning actors and directors to critically acclaimed and award-winning comedies from around the world, the channel is all geared up to showcase the best of English comedy entertainment to its viewers within their comfort zone offering an inclusive viewing experience with family and unlimited daily dose of laughter.

Anshul Ailawadi, Head – Youth, Music and English Entertainment, Viacom18, said, “Comedy Central enjoys a special, ‘happy place’ in the hearts and minds of its viewers. It has been the go-to destination for all in good times and bad. We are very excited to present a new line-up of clutter-breaking shows including ‘Corporate’, ‘Loudermilk’, ‘Detroiters’ and ‘Future Man’. We hope that each show will bring many smiles to many faces.”

The new shows in the offering include:

Awkwafina Is Nora From Queens: The show follows a “20-something woman in Queens who strives for a larger-than-life existence”. Awkwafina plays a fictionalised version of herself, Nora Lum, who attempts to find her own definition of adulthood as she struggles to hold down a job and navigates life with help from her father and grandmother. The series stars Awkwafina and BD Wong. Awkwafina is Nora from Queens S1-S2 is available for the first time in India.

Detroiters: The show follows two best friends and next-door neighbours Sam Duvet and Tim Cramblin, who work together at Tim's family's advertising agency in Detroit (which Tim took over after his father stepped down), producing low-budget TV commercials for local businesses. Produced by Lorne Michaels and Jason Sudeikis, the series stars Sam Richardson and Tim Robinson. The Detroiters S1-S2 is exclusively available on Comedy Central.

Loudermilk: Sam Loudermilk, a former music critic and recovering addict-alcoholic who has not achieved anything like emotional sobriety, is a substance abuse counsellor and support group leader who regularly doles out clever but acid-tongued critiques to his clients, his friends, and any random person he interacts with. Loudermilk is somewhat nicer to the few people close to him, including his best friend and (usually) sober sponsor, Ben Burns, and his sponsee and unplanned roommate, the young Claire Wilkes. The series stars Ron Livingston and is created by Peter Farrelly.

Future Man: A janitor, Josh Futturman, successfully completes his favourite video game (that was considered unbeatable), Biotic Wars, when suddenly the game's two main characters, Tiger and Wolf, appear and recruit Josh to save the world from the real Biotic Wars. Josh and his companions travel through time to change the future. Starring Josh Hutcherson and Eliza Coupe, the series is executively produced by Seth Rogen and Evan Goldberg.

Wellington Paranormal: The show is a New Zealand mockumentary comedy horror television series which follows a group of police investigators as they track supernatural events in New Zealand; the crew look into cases of demon possession, haunted houses, and blood bank robberies. The series is a spin-off of the 2014 film ‘What We Do in the Shadows’ and first television series in the franchise. The series has been created by Taika Waititi and Jemaine Clement.

One Day At A Time: The show is a reimagining of Norman Lear's 1975 series of the same name. The series follows the life of Penelope, a newly single Army veteran, and her Cuban-American family, as they navigate the ups and downs of life. Now a nurse, Penelope is raising two strong-willed children. When faced with challenges, Penelope turns to her "old-school" mother, and her building manager, who has become an invaluable confidant. The series offers a contemporary take on what life looks like in both good and bad times, and how loved ones can help make it all worthwhile. The series stars Rita Moreno and Justina Machado in titular roles.