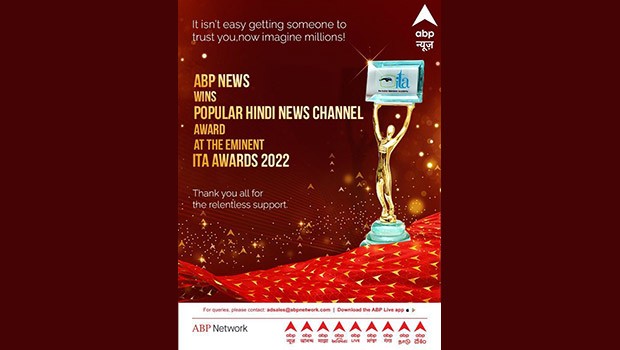 As per the news channel, its popularity is on the rise due to the network's strong programming and its dedication to delivering accurate and unbiased news to its viewers. The channel offers a wide range of programming that appeals to a variety of viewers.

Avinash Pandey, CEO, ABP Network, said, "We would like to thank our viewers and ITA for this prestigious award. The last two years have been difficult for each one of us when in the absence of numbers in the market, we have still been bolstered by the overwhelming support shown by our viewers. Today we are humbled to realise that this award is but another affirmation of the popularity that ABP Network enjoys among the people of India. ABP Network believes in fearless news reporting and in our limitless ability to inspire people, to spark imaginations, and to enlighten minds. Integrity is a vital component of success and we have never compromised on it. Our motto is the relentless pursuit of what we believe to be the truth, and only the truth. This is what ABP Network believes in, and this is why we are in the business of delivering quality news to our viewers.”