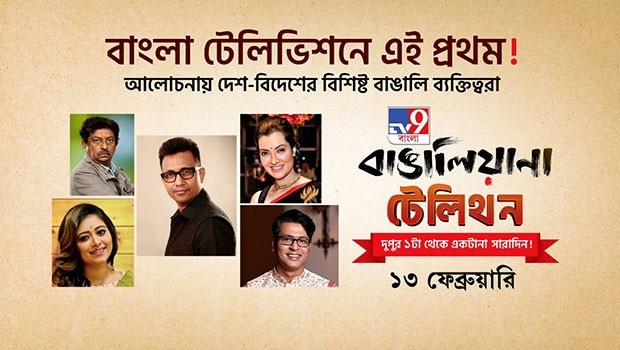 TV9 Bangaliana telethon, the programme in Bengali television proved to be a grand success with participants in India and abroad lauding its initiative, content and style of presentation, as per the channel.

The 10-hour marathon deliberation on various aspects of Bengalis, in which a galaxy of luminaries participated, was telecasted on February 13, 2022.

The Telethon was designed to celebrate TV9 Bangla’s first anniversary. It focused on the achievements of Bengalis across the globe and attempted a serious soul-search and candid discussion on the future of one of the most creative races that form the rich mosaic of the Indian civilisation.

It dwelt on various fields such as literature, music, films, theatre, politics, business, industry, the Bengal Renaissance and women empowerment. Eminent, accomplished and promising Bengalis in various fields participated in the deliberations to discuss what could be the way forward for a race that once played a leadership role in diverse fields in the country.

Conveying his approval of the programme from Washington DC, planetary geologist at NASA, Amitabha Ghosh said “it was an excellent panel discussion.”

Ghosh, who spent his student days in Kolkata, participated in the session that discussed the role of Bengalis in the domain of business and industry.

''It was necessary to deliberate on what constitutes Bangaliana. TV9 Bangla rendered a valuable service by kicking it off,'' Guha said.

Sanjoy Mukhopadhyay said, “I liked the endeavour. Bengal and Bengali culture have not been seen holistically for a long time. The Telethon deliberated on diverse domains such literature, film, theatre, economy, politics under a single umbrella. Those who participated in the discussions were all men of talent and their views enriched us. I hope TV9 Bangla would keep up the effort.”

“It's a matter of great pleasure that a television channel is making this effort. The plan to discuss so many topics under a single umbrella is also novel. Bengalis have a distinctive culture, education and politics. Trying to accommodate different perspectives is indeed remarkable. It will be great if this effort is continued,” Sarod player Pandit Tejendra Narayan Majumdar said.

During the course of the Telethon diverse subjects were tackled by host Barun Das, the CEO of TV9 Network, he conceived the entire programme and steered the pioneering exercise.

A lot of voices from the public also lauded the channel’s effort. “Watched a lovely and substantive programme after a long time that touched the heart. Barun Das was excellent as an anchor. I congratulate him,” a headmistress of a city school said.

A viewer remarked, “The programme has left a sense of fulfilment in my heart. This programme of TV9 Bangla rose to a completely different level. We sometimes used to watch such programmes on TV when we were young. The Telethon delivered a different satisfaction.”

In the run up to the event the TV9 CEO had said, “TV9 Bangla would mobilise and sensitise about 10 crore Bengalis in the quest for their glory. To deliberate on the present and think of a roadmap for the future. We intend to set up an advisory board consisting of eminent personalities who are the legends in their respective fields. The exclusive board would enrich the endeavour and guide us through this journey for our mission seeking rejuvenation of Bangaliana.”