India’s broadcasting regulator Telecom Regulatory Authority of India (TRAI) is likely to issue a fresh order soon aimed at putting an end to the practice of broadcasting channels on dual LCN (Logical Channel Numbers), which is illegal as per the rules.

Despite being not allowed, the channels have been blatantly undertaking dual or multiple LCN placements, forcing viewers to see their channel on various slots.

The Telecom Disputes Settlement and Appellate Tribunal (TDSAT) in May 2019 had allowed the use of landing page, but dual or multiple placements of a channel on a cable network remains illegal, which means that if a channel is using the landing page, it cannot be seen on any other slot including in the genre it’s actually placed.

​​TRAI had challenged the TDSAT order in Supreme Court and the apex court is yet to pronounce its order on the issue.

“Landing is a set-top box property, but it should not result in dual LCN. This essentially means that a channel appearing on landing should not be placed in the genre on its original logical channel number. TRAI does not allow that and it is illegal,” a senior government official told BestMediaInfo.com.

The usage of landing pages has increased massively, especially in the News genre.

Any large and reputed network would ideally not take the risk of getting into trouble by allowing a channel to be present both on landing and LCN, thus making it a case of dual LCN, which is a crime.

If a channel is on landing and can captivate the audience, it will benefit the channel in terms of ratings.

At the same time, it is a very risky proposition for a news broadcaster also. When a viewer lands on a certain channel and incidentally there is an ad break or the content playing at that moment is not of interest to the viewer, the viewer’s chance to land on the channel again is minimal as the same channel is not appearing in its genre. Therefore, there’s a high chance that the viewer will surf the other channels in the genre and chances of him returning to the channel on the landing page are slim.

Knowing this risk, the news channels do not opt for large networks for landing deals. Rather, they usually sign multiple deals with small networks/headends thinking they would not be caught by TRAI.

TRAI’s fresh order, therefore, would be a deterrent to the hundreds of DPOs and channels that indulge in this illegal act.

On the other hand, BARC India is ready with its algorithm-based data validation method to mitigate the impact of the landing page on viewership data across all genres of channels. Previously, the outliers were removed on the basis of symptomatic statistics. BARC replaced it with a method that directly uses inferential statistics to deliver better results across all genres.

It has been highlighted by BestMediaInfo.com several times (here and here) that the landing page was “the tool” used by former CEO of BARC India, Partho Dasgupta, to suppress Times Now and benefit Republic TV when it was launched in May 2017.

The forensic report by Acquisory found Republic TV’s final viewership data after outlier cleaning was surprisingly increased by 10, 4 and 3 TVTs in Week 27, 39 and 46 of 2017, respectively. Whereas, around half of the viewership numbers of Times Now were excluded despite the fact that Dasgupta was aware of Republic TV’s landing deals. 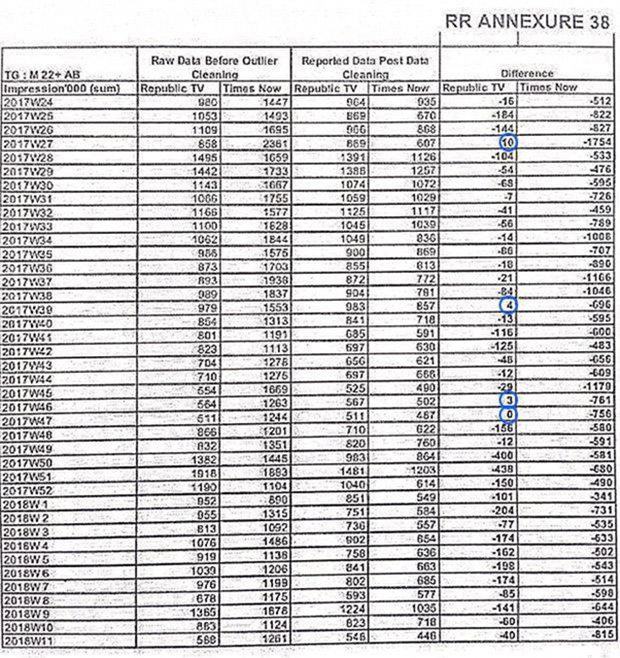