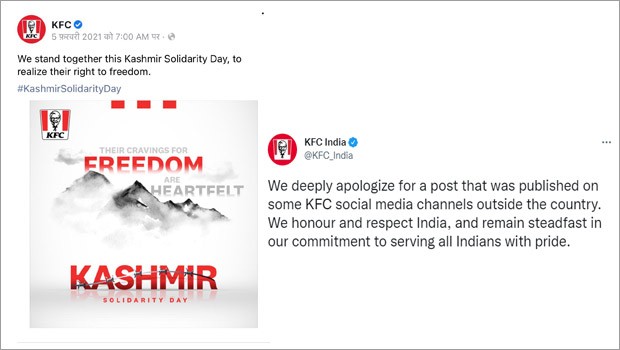 Automaker Hyundai was recently at the receiving end of fury of Indian netizens after its Pakistani social media page put out a tweet on the highly controversial and delicate topic of Kashmir on February 5. Several other international brands too faced the wrath of Indians for similar posts on ‘Kashmir Solidarity Day’, a day which Pakistan has been observing for over a decade in an attempt to show support to separatist elements working on the Indian side of the border.

International brands coming out to support such a sensitive topic was not well-received by Indians who had been patronising these brands for a long time.

This was followed by apologies coming in from almost all of the brands for their act. Below we list  For the past two days, Twitter has been a centre for people expressing their outrage and brands coming in and apologising.

Hyundai- After a post by the brand’s Pakistani dealer went viral, the brand has apologised twice. In its first attempt at an apology that was largely dismissed by people, the brand said, “The unsolicited social media post linking Hyundai Motor India is offending and our unparalleled commitment and service to this great country. India is the second home to the Hyundai brand and we have a zero-tolerance policy towards insensitive communication and we strongly condemn any such view.”

After this, the company issued a fresh statement which said, “It is clearly against Hyundai Motor’s policy that the independently-owned distributor in Pakistan made unauthorised Kashmir-related social media posts from their own accounts.”

“Once the situation was brought to our attention, we made the distributor acutely aware of the inappropriateness of the action. We have since taken measures to ensure the distributor which misused the Hyundai brand identity, has removed the social media posts and we have put in place processes to prevent a future recurrence. Our subsidiary, Hyundai Motor India, is not associated with the distributor in Pakistan, and we strongly reject the distributor’s unauthorized non-business-related social media activity,” it added.

Bagchi also said that immediately after the post was noticed on February 6, 2022, the Indian Ambassador in Seoul had contacted the Hyundai Headquarters for an explanation after which the post in question was removed from the aforementioned handle.

KFC- The restaurant brand apologised for the post on their social media handle outside the country, albeit the apology did not contain the name of ‘Pakistan’.

“We deeply apologize for a post that was published on some KFC social media channels outside the country. We honour and respect India, and remain steadfast in our commitment to serving all Indians with pride,” it said.

The brand’s Pakistan handle had posted a message last year on ‘Kashmir Solidarity Day’ which said sentences like “Their cravings for freedom are heartfelt,” the post has now been taken down.

We deeply apologize for a post that was published on some KFC social media channels outside the country. We honour and respect India, and remain steadfast in our commitment to serving all Indians with pride.

Dominos – The brand’s Pakistan social media handle had said: “The nation is one in support of our beloved Kashmiris, may they live as a sovereign nation soon.”

Apologising this time to India the brand said, it regrets the unsolicited content published outside the country.

This is the country we have called our home for the last 25 years, and we stand here to protect its legacy forever. We respect and honour everything the country has to offer. pic.twitter.com/8II6XuLxb0

Kia- The brand said it has a clear policy of not engaging in political and cultural matters and its commitment remains to deliver market-leading products to India.

Toyota- The automobile brand said in its apology that it is an apolitical entity and any political statements made by dealers or other stakeholders are not authorised by the company.

It later said in a fresh statement that strict action has been taken against the unauthorised posts.

Suzuki Motor Corporation- The company said any kind of communication from a dealer’s end does not represent the company.

Honda- Automobile brand Honda Motors in its issued apology said, “As a part of its policy, Honda endeavours to ensure that in any part of the world it is present, it avoids comment on race, politics and religion.” It added that any statements made by dealers, associates or stakeholders are not in line with its policy.

Willmar Schwabe- According to the homoeopathic medicine company, the news of it supporting the solidarity day is fake. It said the company has no legal entity in Pakistan and is now investigating the person behind such activity.

As a business policy, Schwabe Group does not comment on political or religious issues in any specific region. The Company, Dr.Willmar Schwabe India came to know of the message circulating in the Social media (WhatsApp, Twitter & Facebook, etc.)

Pizza Hut- The fast-food chain, that like many others had put out posts on February 5, in a public statement said, "It does not condone, support or agree with the contents of a post circulating in social media. We remain steadfast in our commitment to serve all our brothers and sisters with pride.”