The mango drink brand has unveiled the latest campaign, directed by filmmaker Shoojit Sircar, which celebrates the spirit of magnanimity 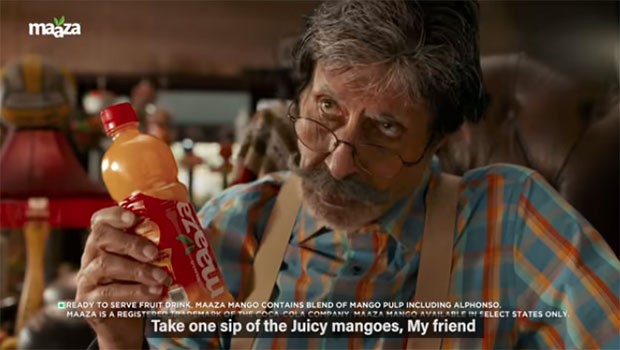 The TVC has been directed by filmmaker Shoojit Sircar, who has previously showcased his talent with successful movies such as ‘Vicky Donor’, ‘Piku’, ‘October’, ‘Sardar Udham’, and many more.

The new TVC will be amplified across TV, digital, and radio with a 360-degree approach.

The ‘Dildaar Bana De’ campaign ties together the spirit of magnanimity with the king of fruits – the mango, also symbolic of prosperity and generosity.

The TVC shows Hegde enjoying a game of cricket with the kids in her neighbourhood, when she accidentally hits the ball outside the grounds, which ends up landing right inside Bachchan’s home. Bachchan, who can be seen playing the role of a senior citizen and is infamous for never returning any balls that fall into his house – until he relishes a bottle of Maaza, which completely changes his mind and opens up his heart.

The film ends with an unexpected act of ‘Dildaari’ from Bachchan, when he showers his collection of several balls that had ever fallen into his home, over the years.

Conceptualised by McCann World Group, it intends to strike a chord with people who often go out of their way to help others with acts of magnanimity and kindness.

The brand’s objective is to continue being the country’s most beloved mango drink, while also contributing to the socio-economic development of Indian farmers.

Ajay Konale, Director Marketing, Nutrition Category, Coca-Cola India and Southwest Asia, said, “Maaza is a heritage brand of our country - since 1976, it has been India’s most loved mango drink and a strong brand in the company’s offerings in India. Maaza is known for its unparalleled taste of real, authentic mangoes and is a leading brand in the Mango segment. With this new positioning, we now aim to evolve the brand’s purpose, making it synonymous with generosity and ‘Dildaari’. We are extremely humbled to have Mr Bachchan and Ms Pooja Hegde onboard with us to bring alive Maaza’s new evolved philosophy.”

Director Shoojit Sircar added, “Creating the Maaza TVC was an absolute delight and fun filled experience. Especially the character of Mr Bachchan playing the role of a quirky senior citizen, who hoards all the balls being played by kids in his neighborhood. The scene, wherein Mr Bachchan drinks Maaza, which brings about a sudden and positive shift in his attitude, is truly enjoyable and a pure testimony of his magnanimity. Pooja Hegde brings in her own exuberance and freshness to the film. Overall, I believe the film perfectly sums up to the values of ‘Dildaari’.

Sambit Mohanty, Creative Head, McCann Worldgroup, said, “Maaza is synonymous with ‘mango in a bottle’. Our new campaign for Maaza builds on the richness of this beverage and depicts the magnanimity that ensues upon drinking a Maaza. It was great fun working with Shoojit Sircar on this film and watching Mr Bachchan turn-in yet another captivating performance.”

Hegde said, “Becoming the face of a brand that I have enjoyed drinking since my childhood, is an opportunity I could never have passed on. This campaign is very close to my heart, as it provided me with the special opportunity to co-star with my idol and inspiration - Mr Bachchan, and also work with one of the greatest directors in Hindi cinema Mr Shoojit Sarkar. I hope everyone watching the campaign film is inspired to spread positivity and humanity with acts of generosity and magnanimity for those around them.”