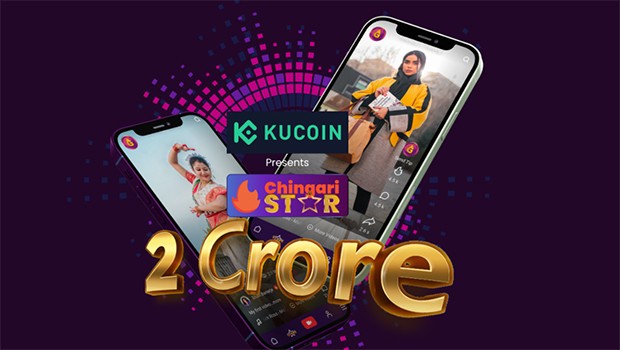 Short video platform, Chingari, after engaging its creator community with the Chingari Star contest, is now eyeing to expand its userbase. The digital platform recently spent a big share of its advertising spends on full page print ads on leading dailies.

Featuring Salman Khan, the advertisement urged creators to participate in the Chingari Star competition. Launched in collaboration with KuCoin, the winners stand to win GARI Tokens worth Rs 2 crore. 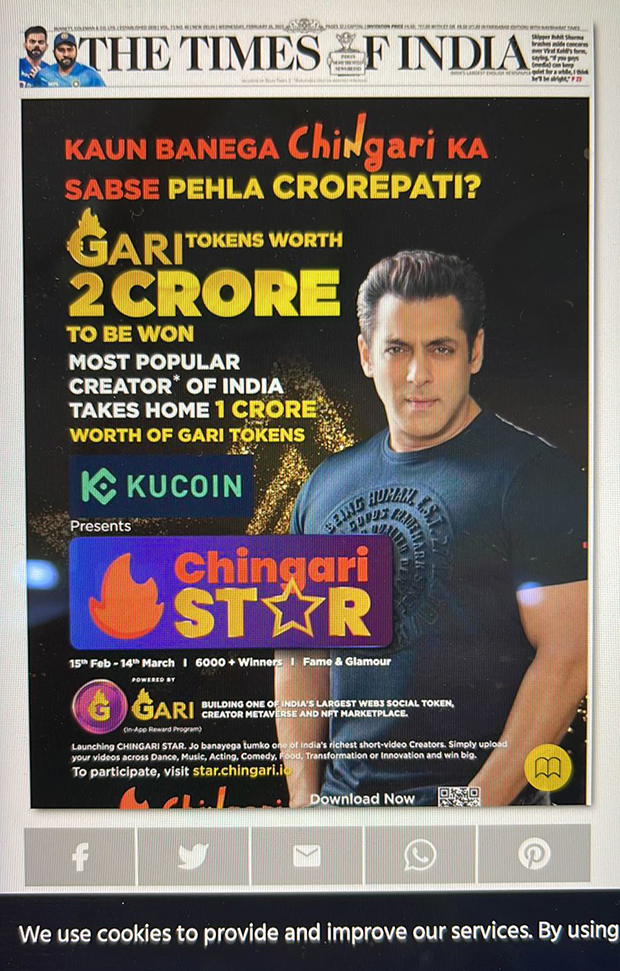 While speaking about Chingari Star, Deepak Salvi, Co-founder and COO, Chingari App, said, “Chingari Star is one of the biggest talent hunts organised by a social app in India. It's a nationwide search for the upcoming and talented creators across India. The aim is to reach to the remotest corners of the country and identify and explore the creativity that delves in these areas.”

Apart from this, the short video app has also chosen a different advertisement strategy to promote the contest.

Short videos, NFTs and Crypto are markets with very precise TGs and can’t be considered as something of mass interest. However, Chingari took out ads in print, which is largely considered as a mass medium, to promote its ongoing mega event.

Upon being asked about the motive behind the elaborate print campaign, Salvi said, “Yes, the Gen Z is more available on the digital platforms today- which is why we have a digital plan in place too. However, our potential creators are also in the age group between 25 to 50+ who stay in tier 2,3 & 4 cities, and the rural regions where a newspaper front page ad for them in their local language is still a more credible source of information than a post on Facebook, that they may not have access to.”

Further, he stressed on the significance of print and said, “The print media in India still holds a very strong reach, especially in the remote and interior parts of the country, and has great credibility amongst the readers across. Even while moving towards the modern platforms in the new era, we hope to never forget our traditional roots.”

Salvi also discussed the overall media plan for Chingari Star and GARI. “The media plan will be a mix of print+ digital + social media+ Radio+ Tv and In-app promotions. We will also be looking at cross-promotions in association with the various brands that we cater to and we will be on-ground promoting Chingari Star in top colleges across India,” he said regarding the ad strategy for Chingari Star.

He added that GARI, as a platform, will have an elaborate advertising plan with major part being about educating the masses about NFTs and crypto. Salvi said, “We are already working on creating awareness amongst our user base about NFTs and how GARI will play an important role in the trading of NFTs. With the GARI wallet integration into the app, we have taken a step forward towards the launch of Chingari powered by GARI NFT marketplace.”

The Chingari Star contest went live on February 15 and will continue till March 15, 2022. Contest winners will be announced in March, following which they will be invited to Mumbai for a victory celebration. Every Chingari user will get 5 votes each day to vote for their favourite creators and make them win.