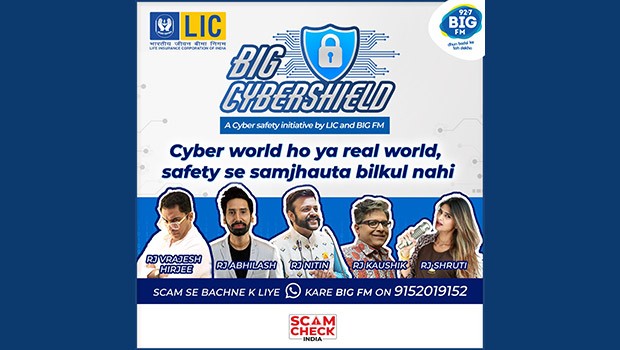 With the world taking the digital route, especially in the last two years owing to the global crisis, people have seamlessly shifted to digitization like never before. While this has helped the world to become digital savvy, it also poses a threat of cyber-crime with severe repercussions.

With cyber-stalking, cyber-bullying and cyber frauds on the rise, Big FM had recently partnered with ScamCheckIndia for their ‘Big Cybershield’ campaign.

Through this the radio network aimed to raise awareness on the critical issue of cyber security by educating people to use the digital space cautiously.

The campaign was recently culminated on Big FM’s social media in the presence of Satej Dnyandeo Patil - IT and Home Minister, Maharashtra and Tushar Bhagat - Founder Scamcheckindia.com, an Initiative by Safecom, and was moderated by RJ Rani.

With leading RJs of the network helping spread the word, the campaign commenced with the support and encouragement from various eminent personalities such as actors Abhishek Bachchan, Gulshan Grover, Jimmy Shergil, Siddhanth, etc, who promoted the activity on-air.

With activities like scam stories, scam call, Scam shooter contest with listeners, the number of listeners who benefitted from this activity was around 8.85 lakhs (source: Scamcheck India).

Targeting the senior citizens, a Digital Kaksha was held for them where every day, a cyber expert taught things about ‘safe online practice’.

Sunil Kumaran, Country Head - Product, Marketing and Thwink Big, Big FM, said, “The past two years has been a testing time for all of us, especially now that the world has moved to digitisation completely, people are facing a lot more trouble to deal with cyber-crime.  We took this opportunity to partner with ScamCheckIndia in one aspect of their effort – to counter digital crimes. Through this campaign, we were able to create awareness among the general public about the pitfalls of the limitless worldwide web. We are thrilled that we could harness the power of the media towards this much-needed initiative.”

Tushar Bhagat, Founder, ScamCheck India, said, "With unrestricted access to the internet during the time of lockdown, we have a steep increase in the numbers of cyber-crimes being committed across the city. We were keen to address these issues, raise awareness and educate people, leading them to safe online habits. We are happy to have the support of Big FM in this initiative, so that the knowledge may reach a much wider audience who is able to safeguard themselves.”

The campaign saw a digital reach of 1.38 lakh impressions.