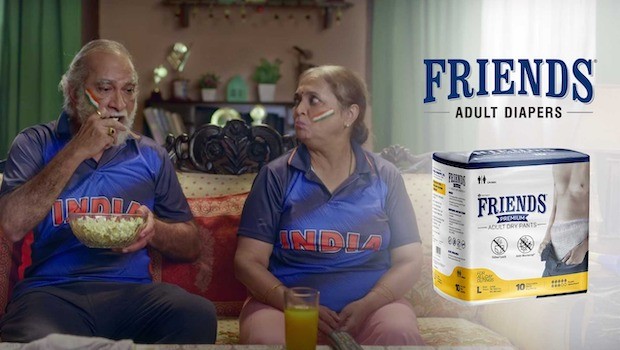 Nobel Hygiene’s flagship brand, Friends Dry Pants - specially designed for people suffering from Incontinence, has launched a digital film to spread awareness on how the use of adult diapers can mean ‘urine leakage se aazadi mubarak’.

The video was conceptualised and filmed by agency Wavemaker India. It features an elderly couple essayed by Marathi theatre actors and real-life partners - Anil Khopkar and Swaroop Khopkar.

The DVC showcases the cost of Incontinence—missing major moments in a match due to the ‘baar baar bathroom jaane ka problem’ and urges users to move and choose dry pants so they don’t miss the little moments that make life worth living.

This new DVC puts the woman in the spotlight instead of having her play a supporting/background role. The woman is thus seen as the cool early adapter who is goading her husband into choosing ‘aazadi’, as well.

Kartik Johari, Vice-President – Marketing and e-commerce, Nobel Hygiene, said, “We have found that consumer truths resonate the most with our audience, and consequently, helps them break the adult diaper taboo at home. Also recently, a primary study we conducted found that it takes anywhere between 9 months and 1.5 years for those facing Incontinence to start using adult diapers. For several months, sufferers attempt to 'manage' concerns instead of choosing dry pants because of social stigma. Consequently, we used consumer truths heroed by our female protagonist in this ad showing her as a trendsetter and urging her husband to join the dry pant league! We were helped by the real-life chemistry of Mr and Mrs Khopkar, and we hope to keep making many more such slices of reality for our growing audience.”

The age of people with incontinence has decreased to 25- 35 years in the last decade and the number of women is higher in this age bracket, primarily because of childbirth. The social stigma continues to create challenges for women and men along with their families who become bound to the same Incontinence to help them manage it.

Karthik Nagarajan, Chief Content Officer, Wavemaker India, said, “With this Friends campaign our attempt was to encourage conversations around the category without feeling awkward or embarrassed and show adult diapers as a part of their existing life that they've embraced fully. By showing an elderly couple enjoy their life while accepting their need for an adult diaper was the key to normalising the conversation.”