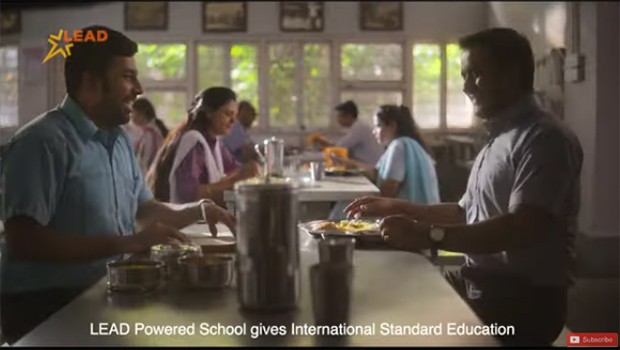 School EdTech unicorn Lead has launched a campaign, comprising of two TVCs conceptualised by TBWA\India, across TV, digital and BTL. The campaign talks about visible learning outcomes of children studying in Lead-powered Schools.

It builds on activity-based, practical learning methods that depart from old, lecture-based passive modes of teaching and learning that the parents' generation was accustomed to.

The two TVCs – one focusing entirely on South India and the other on the rest of the country are directed by filmmaker Nitesh Tiwari.

They are being aired across multiple GEC and regional channels, and will be a part of Lead’s 360-degree campaign via outdoor, digital and BTL activation.

The first film, ‘Syllabification’ is a story of two fathers bonding over the right way to pronounce big English words by breaking them up into syllables - a trick taught to them by their kids who go to Lead-powered schools. The TVC dramatises the advantages of one of Lead’s flagship programme, ELGA (English Language and General Awareness), which teaches English as a life-skill rather than a subject.

The second film, ‘Aloo Se Electricity’ created for the South-Indian market shows a dad who says he would have been a scientist and inventor like his kid, if only he had the opportunity to study in a Lead-powered School when he was growing up. The TVC is built around the innovative ways in which science is taught in a Lead-powered school via ‘learn by doing’ approach.

Lead Chief Marketing Officer, Anupam Gurani, said, "The pandemic continues to impact all of us, especially those belonging to the lower economic strata. There are plenty of students who have not gone to school in the past 20 months and this has resulted in severe learning gaps. This is where Lead comes in. We are building India's largest network of schools that provide international standard of education at an affordable price. Through this campaign, we want to help parents find the right Lead-powered school in their vicinity, thereby bridging student learning gaps and enabling parents to provide world-class education to their child, right in their hometown."

Filmmaker Nitesh Tiwari said, “It was fantastic to work with Lead again on their new campaign. The latest films are as relatable as the previous ones for parents who are always trying to get the best education for their children. These films beautifully capture the emotion of how parents want to give more to their child and equally be a part of their learning process. The scripts felt quite personal and I ended up drawing a lot from my life experiences.”

CEO of TBWA\India, Govind Pandey, said, “Lead is leading a movement in India to provide access to a world-class education to as many kids as possible regardless of which town or city they are studying. We see many progressive and proud parents joining in and giving their kids the foundation that opens all kinds of possibilities for them in the future. This campaign reflects this and invites more and more parents to join this movement.”

Parixit Bhattacharya, Managing Partner, TBWA\India, said, “There is nothing more reassuring for a parent than seeing their child display clear, visible signs of learning. Fortunately, for parents who have enrolled their children at a Lead-powered school, this is an everyday reality. We wanted to dramatise this through the new campaign while keeping true to the insight that seeing their kids learn so well can cause a tinge of jealousy while they are flushed with pride.”

Talking to parents and schools in tier 2+ towns, who lack access to resources and face geographical restraints, the campaign highlights how it equips children to bring them on par with students in bigger cities.