While talent-based reality show Junior Super Stars is returning with its fourth season, two new family dramas, Rajini and Vidya No. 1, are also coming to the small screen 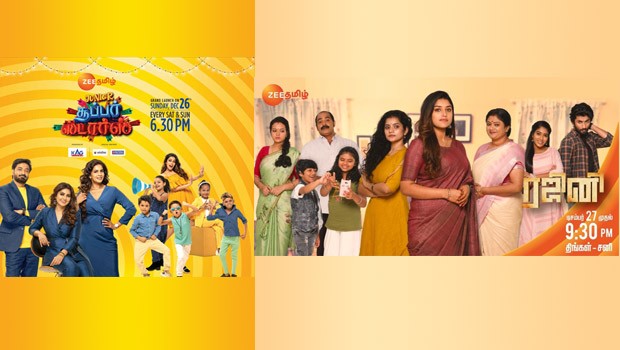 Entertainment channel Zee Tamil has announced the launched of three shows in the month of December.

The channel is bringing back another edition of its talent-based reality show Junior Super Stars on December 26, Sunday at 6.30 pm, followed by the launch of two family dramas on December 27, Monday at 9.30 pm and 10 pm, respectively.

The family dramas, ‘Rajini’ and ‘Vidya No. 1’, will showcase stories of two brave female protagonists who are set to break stereotypes; while Junior Super Stars Season 4 will provide a platform for the young, budding talent of the state.

The grand premiere of the reality show will be done with a three-hour special on December 26, Sunday from 6:30 pm, following which it will air for one and a half hours every weekend (Saturday and Sunday) at the same time.

Season four of the talent-hunt show features 30 kids of the age group of 5–13 years, who will make their way to the grand finale by proving their acting skills in multiple rounds that focus on different genres. This season’s mentors include personalities like VJ Kalyani and Amudhavaanan, who will go above and beyond to help the children hone their skills and win the hearts of the judges.  On the other hand, Sneha, Mirchi Senthil and Samyuktha will be seen donning the judge’s hat to give unbiased opinion of each act. Kiki Vijay will be the host of this season.

The family drama ‘Rajini’ follows the story of a smart woman, who prioritises her family’s happiness over her own desires. In fact, while the show gives us an insight into how women are questioned and criticised for being unmarried at a certain age, it also presents us with the taboo of marriage being the only ideal option for a woman to lead a socially acceptable life. However, Rajini is different as she fights these beliefs and breaks the social stigma by being persistent in loving and caring for her own family. Actor Shreya Anchan is in the role of Rajini, while Yazhini will be seen playing the role of Rajini’s best friend- Anitha, and Arun plays the role of Parthiban (Anitha’s younger brother). The show will air every Monday-Saturday at 9:30 pm.

‘Vidya No.1’ will also premiere on December 27 and will air every Monday–Saturday at 10:00 pm. The story focuses on the life of a village girl, Vidya. The courageous young girl has been successful in developing her own native skills and talent despite being uneducated. However, her life completely changes after she gets married to Sanjay, the son of Vedavalli. Vedavalli is a highly educated individual who owns multiple educational institutions and only aims to be No. 1 in every aspect of life. The heart-warming story of how Vidya, the daughter-in-law makes Vedavalli her mother-in-law realise that life must be lived with love and happiness instead of being number one in everything.

Actor Niharika and young star Tejaswini plays the role of the mother-in-law – daughter-in-law duo alongside YouTube star Iniyan, who will be seen portraying the role of Vedavalli’s loyal and respectful son Sanjay.

Siju Prabhakaran, EVP and South Cluster Head, ZEEL, said, “As has been the case till date, we at Zee Tamil always endeavour to provide our viewers with shows that not only entertain them, but also encourage them to take big and bold steps by showcasing them narratives that inspire them. To give our loyalists another reason to smile this festive season, we plan to launch another season of our popular reality show – Junior Super Stars as well as two inspirational family dramas – Rajini and Vidya No. 1.”

“We’ve received immense love and appreciation from our viewers in the past, especially for our talent-based reality show - Junior Super Stars. To give young, budding children a platform to showcase their talent as well as to entertain our audience, we are all set to launch another season of the show and we hope that the viewers appreciate Junior Super Stars season 4 as well. Apart from the reality show, we are also proud to present Rajini and Vidya. No 1, which are two narratives that will truly have a positive impact on society as it showcases two powerful women battling age-old societal stereotypes as well as prejudices and what follows. The shows are further aimed at strengthening the channel’s prime time band throughout the week and wwe are hopeful that our viewers are entertained and continue to encourage us in bringing such path-breaking, progressive content year on year,” he added.