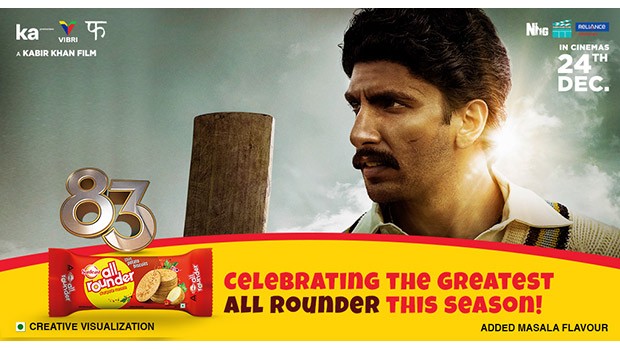 Sunfeast All Rounder, the thin potato biscuit brand launched by ITC in the cracker biscuits category, has unveiled a new co-branded TVC. The brand collaborated with Reliance Entertainment to create a co-branded campaign with the new Ranveer Singh starrer film, ‘83’.

The new ad film draws parallels between the inspirational all-rounder team that won the 1983 World Cup, and the winning combination of potato and ‘masala’ that is the new Sunfeast All Rounder biscuit.

The ad film has been released in Hindi.

Creating an analogy between sports and snacking product, the 20 second ad film opens with a scene from the movie trailer highlighting the confidence and passion of a cricket player who steps out onto the ground not just to play but to win.

It underlines how the perfect blend of the quest to win and extraordinary skills makes a player a true all-rounder.

Building on the same thought, the ad film then showcases how Sunfeast All Rounder is also an all-rounder in a similar vein: a thin, crunchy, ‘chatpata’ potato biscuit that offers a flavourful twist to every snacking occasion.

The ad film concludes with the co-branded visual of Sunfeast All Rounder and the all-rounder team of ’83, encouraging the audience to celebrate the greatest all-rounders this season.

Ali Harris Shere, Chief Operating Officer, Biscuits and Cakes Cluster, Foods Division, ITC said, “We are delighted to partner with Reliance Entertainment to relive India’s historic 1983 Cricket World Cup win. ’83 reminds us of an iconic event that is deeply entrenched in the collective memory of Indians. The World Cup victory was a turning point for India’s sporting culture and played a pivotal role in shaping the cricket landscape in the nation. The movie celebrates the mix of drive, conviction and competence that made the Indian cricket team of ‘83 the greatest all-rounders of all times. Sunfeast All Rounder, as a brand, resonates with these core values and reaches out to billions of cricket enthusiasts and film fanatics to celebrate the all-rounders this season.”

Sameer Chopra, Head of Marketing, Reliance Entertainment, said, “We are delighted to collaborate with Sunfeast All Rounder and launch a campaign that resonates seamlessly with both the movie and the brand. 83’s concept is in line with the core brand proposition of celebrating the All-Rounders. We hope the latest TVC helps us reach out to a wider audience and together we can help the nation relive the story of that momentous triumph."

The TVC that went live on December 24 will be promoted across platforms including social media, TV and YouTube to strengthen the brand’s visibility and bring the brand closer to its consumers.

Tags: Sunfeast Greatest All Rounders 83
Advertisment
More from this section