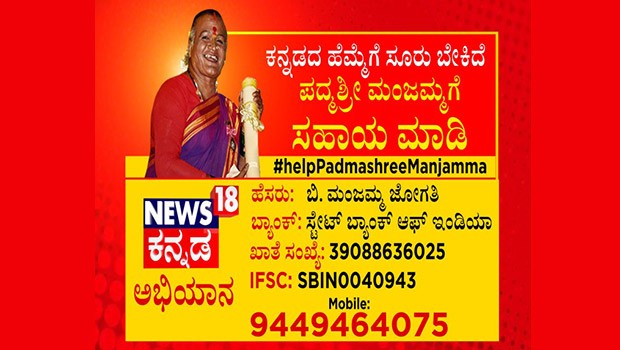 News 18 Kannada has extended support to transgender and Padma Shri awardee Jogati Manjamma’s vision for building a refuge for the welfare of aged transgenders.

Recently, the Padma Shri awardee had highlighted the different issues faced by the community in a special episode of News18 Kannada’s ‘Bemkiyalli Aralida Hoovu’.

Following this, the channel encouraged its viewers to come forward to help Manjamma’s dream come true.

Folk artist Manjamma was conferred with the fourth-highest civilian honour for Art recently.

She is the second person from the transgender community to receive this award. Manjamma is currently serving as the President of the Karnataka Janapada Academy.

The 60-year-old is known for her Jogati Nritya, a part of Jogappa community ritual, and Janapada songs, sung to praise female deities.

The heart-wrenching, yet inspiring, story of Manjamma and her contribution to folk art came to light through News 18 Kannada.

It was on the special episode of ‘Bemkiyalli Aralida Hoovu’ that Manjamma revealed the heart-breaking experiences she went through. This took place during the course of an exclusive conversation with News18 Kannada Editor Sidhu Kaloji. She also mentioned, for the first time, that she is homeless and most importantly, that she wishes to establish an old age home for transgenders.

“News 18 Kannada assisted me in securing a roof, and in accomplishing my ambition of opening an old age home for transgenders. They also requested aid from the people of Karnataka and urged them to send money to my personal bank account. Karnataka’s people's support to News18 Kannada's humanitarian appeal will be remembered forever,” Manjamma said.

Apart from people in general, she also received help from a number of personalities in response to News18’s appeal. Among those who came forward to help were Karnataka’s Revenue Minister R Ashok, who promised to provide land for establishing the centres, and MLA Raju Gowda, Anand Singh and Businessman Deepak Gowda who offered financial help.

On the other hand, Raju Mandya is assisting with the electrical and wiring work of the building, and Nagendra, an auto driver, is also raising funds to help her. A number of other corporates have also pledged to support her.