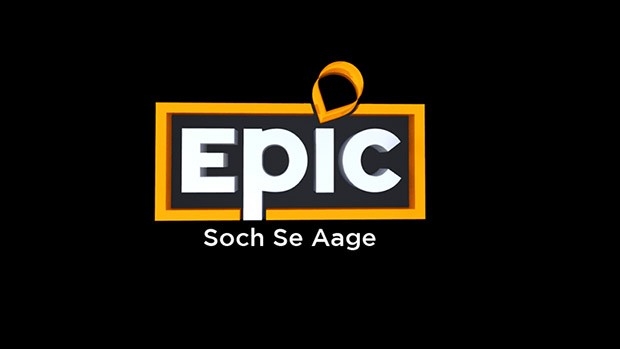 IN10 Media Network’s infotainment channel, Epic, will add another dimension to its offerings by evolving its brand personality.

From December 16, Epic will undergo a brand makeover, and a programming line-up that aims to grow beyond and forge a future for infotainment. The theme of the brand and content positioning throughout the slate of brand-new programming will be – ‘Soch Se Aage’.

Aditya Pittie, Managing Director, IN10 Media Network said, “Epic is the first Indian platform to exclusively showcase India-centric content in Hindi. Epic will always proudly wear the tag of being ‘India Ka Apna Infotainment’. The media universe is poised on the edge of transforming into a metaverse. ‘Glocal’ is no longer just a text book phrase for the future, but the very essence of the modern audience that has explored all that is available from around the world, and is hungry for more. It is this ‘more’ that is at the heart of Epic’s new brand philosophy and will be the cornerstone of showcasing content that is ‘Soch Se Aage’ – beyond the known universe of knowledge, ideas, and stories; into the metaverse of an exciting future that continues to celebrate India.”

The first step into this future is with a slew of new programming that steps forth into this new vision while recreating the old magic of its shows in a reimagined presentation.

Commemorating Vijay Diwas, the first roll-out in the line-up of fresh content is Lakshya 1971 - Vayusena Ke Veer Yoddha, that recreates the events of independent India’s most comprehensive military victory through the eyes in the sky with never-seen-before visuals and the story of the contribution of the Air Force to the war efforts. The show is anchored by Harman Singha.

Following up on it is an ode to one of India’s oldest organizations – a four-part docu-series on the Indian Postal service. India Post – Dhaage Jo Desh Jode, will recount the story of the largest postal network in the world by diving backstage.

Homecoming- A Nation's Fight For Its People is a show that highlights the efforts of the people and the government, as they face and overcome unprecedented challenges, and implement ambitious solutions as they unite as one nation in bringing back all the stranded Indians during the Covid-19 lockdown.

Also in the works is a roadmap to bring to Indian screens international projects that resonate with the new brand philosophy.

In sync with the broadcast originals, are a handful of digital first offerings too which will drive forward the new philosophy.

Epic Khoj endeavors to trace the roots of Indian communities while What’s in the Name delves in to the stories and myths behind how various cities, rivers, historic places, and much more got their names. Short Mid-Wicket Tales is a treasure trove of unlocking cricket-related stories and trivia.

The content will be available on the network’s super-app, Epic On, for audiences across the globe.