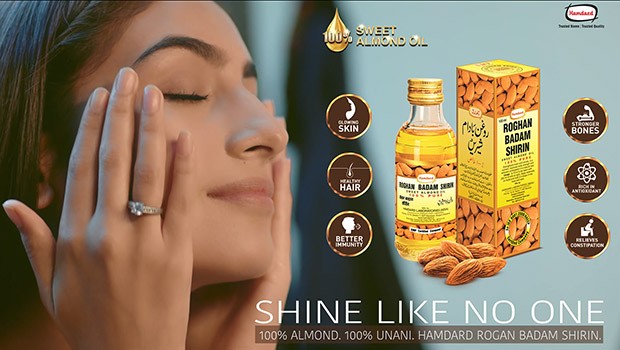 Hamdard Laboratories (Medicine Division) has released the ‘Shine Like No One’ campaign to showcase the benefits of its product- Hamdard Roghan Badam Shirin.

The campaign highlights the key ingredient story of Hamdard Roghan Badam Shirin through a 360-degree media approach. It is launched in 60 secs, 40 secs, and 30 secs duration on various platforms, including social media, OTT and Television.

The ad campaign establishes a connection between the product's qualities and its multiple benefits that help consumers to shine.

Roghan Badam Shirin is a multipurpose sweet almond oil and is known for its multiple benefits.

Suman Varma, CMO, Hamdard Laboratories (Medicine Division), said, "Roghan Badam Shirin is a 100% Unani, 100% Almond oil. It is a market leader, and people swear by its health benefits. The campaign amplifies the core benefit story in an engaging manner. There are two films highlighting different benefit stories-(a) skin and hair and (b) memory power. It is a 360-degree campaign, and we hope the idea resonates with the people.”

Pranav Harihar Sharma, Creative Consultant, Hamdard, added, “The basic idea of the campaign derives itself from this product truth. Every single person has multiple facets. We live various lives in one life. This forms the fulcrum of the Hamdard Roghan Badam Shirin Campaign- Shine like no one. This campaign manifests the stories of multifaceted people who shine in whatever they do. The two facets of the protagonist shown in the film are entirely different yet equally beautiful in their own way. The execution of the idea shows two different worlds- one is full of glamour, and the other is all soul. In both worlds, the protagonist shines and brings a shine on others' faces. These twin shining faces directly connect with the product benefits of Hamdard Roghan Badam Shirin.”

Tags: Hamdard Shine Like No One campaign Roghan Badam Shirin
Advertisment
More from this section