slice, the payment and credit solutions start-up, unveiled its latest ad campaign in leading English newspapers across the country. The ad showcased how traditional credit cards have complex terms and conditions, unlike the slice super card.

In the ad, the company incorporated an interactive digital activation by making readers use Google Lens to decipher the text written in Greek. The ad was published on the front page on November 17 in many English newspapers such as Hindustan Times, The Telegraph, The Hindu English, Deccan Herald, and Deccan Chronicle, across the country.

The ad garnered enthusiastic response on social media after its release and led to conversations around it on LinkedIn and Twitter. 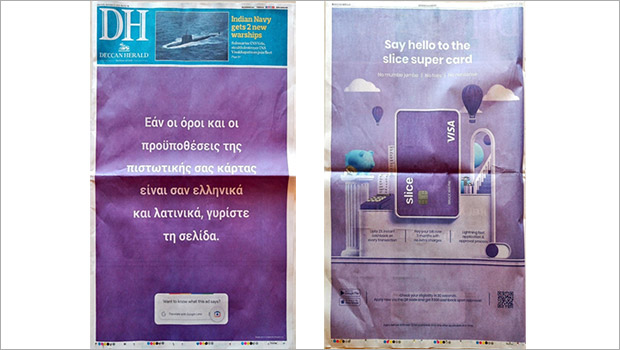 Those who have missed out or are yet to try their hands at translating the text, can go on and give it a try using Google Lens.

Tags: The indecipherable print ad by slice
More from this section

After a bright Diwali, print hopes for a spectacular wedding and new year season