As per it, Apple reports the maximum brand reputation issues while OPPO tops the Brand Reputation Index among key smartphone OEMs in India 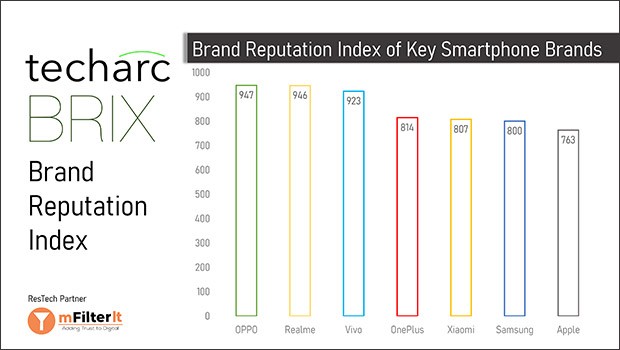 Smartphone brands having strong consumer pull report the majority of reputation issues caused by infringement of brands in digital space, as per Techarc’s Brand Reputation Index (BRIX), prepared in association with mFilterIt.

Seven popular smartphone brands – Apple, OPPO, OnePlus, Realme, Samsung, Vivo and Xiaomi (Redmi and Mi) were monitored across digital ecosystem for 15 days and any infringement case was captured leveraging mFilterIt’s Brand Infringement reporting solution, for the study.  The instances were then categorised and measured for BRIX score as per the defined methodology.

As per the study, Apple reported maximum brand reputation issues while OPPO tops the BRIX among key smartphone OEMs in India.

As per it, the three main techniques of brand infringement identified are: fake gratification, fake presence, and fake representation.

Fake gratification includes instances where scammers infringe any brand’s identity by offering fake coupons, rewards, schemes, and discounts.  This is the easiest trap for consumers who are searching for best deals when they decide about buying a smartphone of their interest.

Fraudsters create fake profiles on popular social networking applications and allure audiences which want to genuinely engage with the brand.  In many instances, fake gratifications are routed through such accounts to entice people looking for smartphones deals.

Under fake representation, which is the severest level of infringement, scammers create a fake website, app or a marketplace.  Using typosquatting techniques, fraudsters create very similar websites, apps and marketplaces and then direct users on such sites to engage which could be used for data theft to financial frauds.

“The first thing brands need to do is to come out of denial mode and create a common synergy between marketing, ecommerce, IT and digital teams. For instance, CISO primarily is mandated to secure the owned digital assets of an organisation.  Now, they should also be looking at how the brand is secured wherever it gets referenced, even on news portals,” Kawoosa added.

Saloni Jain, Lead Analyst for DigiTech focus area at Techarc, said, “In various surveys we have found that 70-80% of the users who originate their purchase from online sources do it looking for best deals and offers.  This becomes a great incentive for fraudsters to run such ‘Ponzi’ schemes infringing a brand’s identity.”

“The only way for brands to stop this is proactive monitoring and taking up such issues with platforms like social networking apps, domain registries, etc,” Jain added.

A lower BRIX score means that the brand is prone to higher risk of being hijacked for scams and frauds.  Some of the key threats that could result due to a low score are data theft, account takeover fraud, financial fraud, bogus association offers, among others.