The campaign conceptualised by Dentsu Isobar comprises of digital ad films as the primary medium of spreading the message which are supported by digital activities, engagement building influencer activity, and branded content to drive the message over a period of six weeks 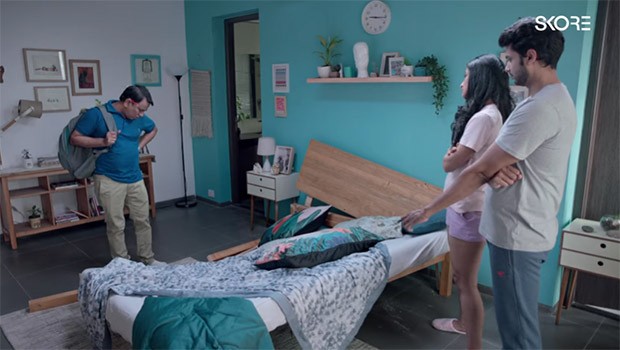 Skore, the sexual pleasure and wellness brand from TTK Healthcare, has launched a new campaign to showcase its wide range of pleasure product offerings.

The ‘Get Naughtier’ campaign is conceptualised by Dentsu Isobar, and it comprises of digital ad films as the primary medium of spreading the message which are supported by digital activities, engagement building influencer activity, and branded content to drive the message over a period of six weeks.

The insight behind the campaign is based on sales data and social media chatter that shows couples were, more than ever before, willing to explore intimacy and try out new products.

Vishal Vyas, Head of Marketing, TTK Healthcare, said, “We have consciously tried to create content that will resonate with young people. We wanted to communicate succinctly that we are more than a condom brand, offering interesting sexual wellness and pleasure products such as vibrating rings, and flavoured lube variants, to pheromone activating spray for men and pleasure gel for women. In a category that’s hard to advertise, stereotyped with sleaze and one that invites moral trolling, consumers are barely aware of the diverse offerings in addition to the large range of diverse condoms we have. This campaign deals with these smartly and tries to normalize experimentation and extended playtime for couples’ sans judgement or guilt.”

Aalap Desai, National Creative Director, Isobar India, says, “The category, though creatively fertile, invariably invites a lot many restrictions and censorship from mainline media. I am just thrilled that the client was willing to explore a digital only eco-space to market such never-before advertised products. Not only are the media touchpoints relevant to the consumers for whom the products are meant for, but also, it’s one of those rare and truly integrated campaigns covering content, social media, performance, influencer marketing and OTT films via a singular narrative. In a way, the challenge thrown at us by the mainstream media only egged us to think naughtier!”

The integrated digital campaign aims to generate buzz over multiple touchpoints cohesively for maximum impact. The social media content drives engagement through interactive content encouraging brand awareness among the target audiences through active participation. A large-scale sampling activity via social media contests and other activities is also being undertaken to create familiarity with the product offerings.

Two digital films that support this campaign encourage audiences to explore their naughtier side for a happy well-rounded life while showcasing the range of Skore products.