In season six, the duo of Rocky and Mayur will be travelling through the states of Telangana, Andhra Pradesh, and Tamil Nadu 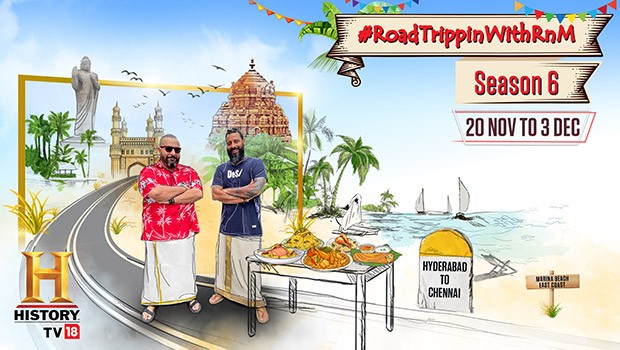 HistoryTV18 is back with the sixth season of road trips for the digital-first show ‘#RoadTrippinWithRnM’. In season six, the duo of Rocky and Mayur will be travelling through the states of Telangana, Andhra Pradesh, and Tamil Nadu. The show, which kicks off on November 20 will start at Hyderabad and end a fortnight later at Chennai, on December 3.

Arun Thapar, President, Content and Communication, A+E Networks, TV18, said that the sixth outing of #RoadTrippinWithRnM shall include several offbeat destinations across the three states.

“As the world begins to open its arms to tourism after almost two years and revenge travel is apparent, it’s a joy to watch Rocky and Mayur take to their natural habitat - the open road,” Thapar said.

“#RoadTrippinWithRnM has been pioneering, in so far as it has brought viewers travel experiences during a drought of fresh content, in near real-time, from location and across multiple social media platforms and screens. The show celebrates the spirit of adventure, optimism and looking ahead, to what new and wonderful things lie around the next bend in the road,” he added.

Rocky, the star of the show, said that he was eager to relish “the absolutely incredible food of coastal Andhra, Rayalaseema and Telangana. I’m also beyond excited about the vast differences we’re going to encounter travelling from the predominantly vegetarian Tirupati towards the coastal and lesser-known towns of Ongole and Sriharikota. This trip is going to be quite the study of contrasts!”

Mayur, the other half of the dynamic duo, is also raring to explore Tamil Nadu and all its delicious offerings. He says, “Tamil food, beyond just idli and dosa, is finally finding its place in the sun and, I get to eat the real deal in eateries that have stood the test of time. The food scene in Chennai has exploded in the last few years so it's going to be an interesting stroll down memory lane to find old memories and make new ones.”