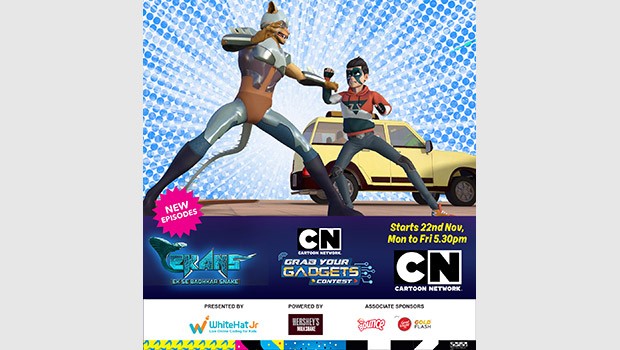 Cartoon Network has announced that it is coming up with fresh new episodes of its first local sci-fi superhero CGI series, ‘Ekans – Ek Se Badhkar Snake’. These will start airing from Monday, November 22, at 5:30 pm, and then from Monday to Friday from 5:30pm to 6:30pm.

The channel has launched the contest “Grab Your Gadgets Contest”, which will further up the excitement by a notch for the fans. Fans can take part in this contest by simply tuning in to Cartoon Network, watching the show from 5:30 pm to 6:30 pm, and spotting the gifts that flash on the screen. Prizes such as mobiles, cameras, smart home bots, headphones, speakers, tablets, and more are up for grabs, from November 22 to December 03, 2021. The contest is presented by White Hat Junior, and powered by Hershey’s Milkshake, with associate sponsors GoodKnight Gold Flash and Sunfeast Bounce.

Abhishek Dutta, South Asia Network Head for Cartoon Network and companion channel Pogo, said, “'Ekans - Ek Se Badhkar Snake' has received a great response since its launch, thanks to its unique mix of sci-fi themed action, relatable characters and humour. We’re sure the show, with all-new adventures of Ekans, will continue to be a favourite with kids and families.”

The animated series features a 13-year-old street-smart wunderkind, Ekans, who is chosen as ‘the one’ and is gifted a ‘naagmani’ by the most powerful snakes, thanks to his heart of gold and fearless attitude. With extraordinary snake-like powers, the otherwise conventional tech-savvy youngster obtains heightened sensory perceptions, ability to camouflage, flexibility, and strength to keep humanity safe from the evils of the world. That’s not all; his trendy hi-tech superpower suit with mechanical snakes gives him additional abilities to cleverly outsmart villains.