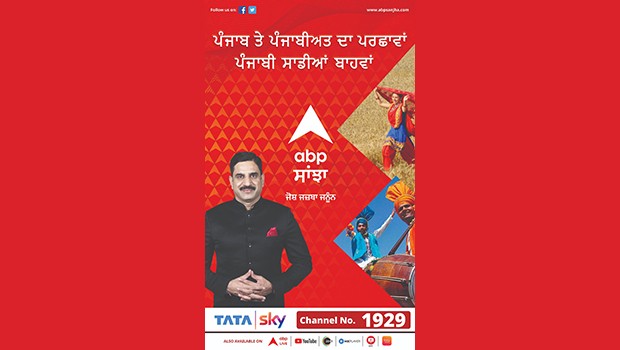 ABP Sanjha has entered into a partnership with Tata Sky and will now be available on the direct-to-home (DTH) platform. With this move, the channel, which has a special focus on Punjabi and Punjabiyat, will be available to subscribers of the DTH platform.

The channel provides its viewers with content covering political, social, economic and sporting events from the Punjab region. Its digital news platform also has 1.39 million subscribers on YouTube and 1.1 million likes on Facebook.

Avinash Pandey, CEO of ABP Network, said, “Since the time we started ABP Sanjha on the internet platforms in 2014, it has garnered a string of affiliations and numbers. ABP Sanjha’s debut on Tata Sky is a big leap for a brand that already has a strong loyal base on Zee5, Jio TV, MX Player, Amazon Fire TV. ABP Sanjha also reflects the emerging trend in the industry, where the products are launched into streaming platforms first and then go onto cable and satellite platforms.”

The debut on Tata Sky is coming ahead of next year’s assembly elections in Punjab. The channel is, therefore, seeking to focus on issues related to rural parts of the state and the evolving politics at grass-root levels. It has also some shows in the pipeline which through on-ground coverage will highlight the important issues of the region.