The brand film with brand ambassador Manju Warrier focuses on bringing people with diverse taste and preferences together; and nothing does that better than a good ‘sadhya’, a full Kerala style meal with multiple flavours 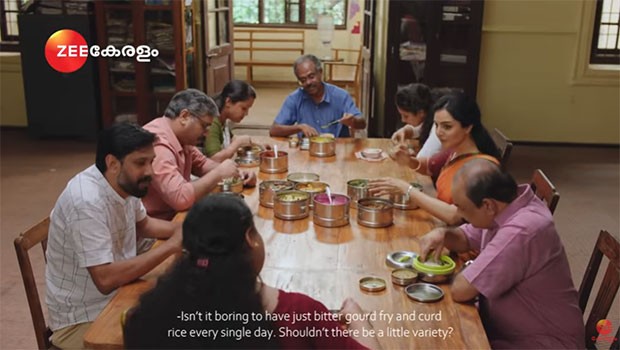 Malayalam GEC Zee Keralam has unveiled its new brand film featuring Manju Warrier as its brand ambassador. The channel showcases stories that are engaging, rooted in culture and more relevant to the current value systems in Kerala. With seven original fictions and two non-fiction properties, Zee Keralam showcases the life of a true Malayali that feature women who take pride in their culture and believe in their progress.

This brand film focuses on bringing people with diverse taste and preferences, together; and nothing does that better than a good ‘sadhya’ (a full Kerala style meal with multiple flavours). This spread of food draws parallel in conveying the same abundance and variety in the stories told on Zee Keralam connecting with its consumers on a rooted level. Here Warrier, representing the brand, brings a scrumptious spread to be shared among colleagues with something specially made for everyone, just as the channel offers stories that are sure to appeal to every taste – promising limitless drama, comedy, romance and excitement for everyone.

Santosh J Nair, Business Head, Zee Keralam, said, “Our brand is known for stories that showcase ordinary women who are crafting an extraordinary destiny for themselves. Malayali women are well educated and they believe that they rightfully deserve a first-class life; instead of being stuck frustrated, they are raring to go pursue that better life. Superstar Manju Warrier is a perfect representation of a Malayali woman with her hopes, her aspirations and her dreams.”

“I am thrilled to be the face of Zee Keralam, which is a first for any channel targeting the Malayali audience. Moreover, the premise of the campaign stemmed from something quintessentially Kerala. With our state having an abundance of natural beauty, arts, cultural diversity, history and education; our food always touches a personal cord with the people from my state and across the country. This film’s theme is limitless entertainment, a reflection of Zee Keralam, a brand that takes an extra effort to know its consumers and provide them with exactly what they’re looking for and tailors content to its audience’s tastes,” said Warrier.

Zee Keralam has always stood for the ordinary Malayali woman — capable, confident, and independent. To fulfil the brand promise of ‘Neithedukkam Jeevitha Vismayangal,’ Zee Keralam wanted to put a face to the brand — an individual representing the brand values, who could be a ‘kootukari’ in the lives of Malayali woman as they take a step towards their extraordinary destinies.

The campaign featuring Warrier as the brand ambassador with the tagline ‘Ivide Aswadanathinu Athirukalilla - here, there is no limit to entertainment,’ is a culmination of the brand offerings to its audience.