The channels host a special social media trivia contest, which tests viewers knowledge about Wonder Woman through a pop quiz on Instagram stories 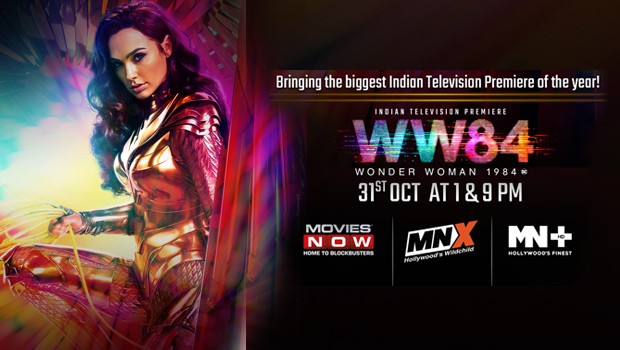 Bringing the best of Hollywood blockbusters and the most anticipated movie titles to television viewers in India, Movies NOW, MNX and MN+ are set to keep audiences on the edge of their seats this weekend with the upcoming Indian television premiere of Wonder Woman 1984. Earning the highest box-office opening in 2020, Wonder Woman 1984, the most exciting superhero movie of recent times will air this Sunday, October 31 at 1pm and 9 pm on Movies NOW, MNX and MN+. Based on one of the most loved DC Comics superheroine of all time, Wonder Woman aka Diana Prince, the movie is the ninth instalment in the DC Extended Universe and a stand-alone sequel to 2017's Wonder Woman, taking place 66 years after the events of the previous film.

Set in the year 1984, the movie follows Diana’s life after saving the world in Wonder Woman (2017). Living quietly among mortals in the vibrant, sleek 1980s - an era of excess driven by the pursuit of having it all. Though she's come into her full power, she maintains a low profile, and only performs heroic acts incognito. With the memory of Captain Steve Trevor, etched on her mind, Diana Prince becomes embroiled in a sinister conspiracy of global proportions when a transparent, golden-yellow gemstone catches the eye of the power-hungry entrepreneur, Maxwell Lord. With Maxwell Lord and The Cheetah out to destroy earth and her long lost lover Steve Trevor resurrected from the dead; Diana has to muster up all her strength and powers once again to save the world from evil. Directed by Patty Jenkins, the movie features Gal Gadot stars as Wonder Woman, alongside Chris Pine as Steve Trevor, Kristen Wiig as The Cheetah, Pedro Pascal as Maxwell Lord.

Promising viewers an immersive TV viewing experience this festive season, Movies NOW, MNX and MN+ adds a generous dose of entertainment with an exciting line-up of engaging and interactive activities and gratifies ardent fans with official Wonder Woman merchandises. Magnifying the excitement during the days leading up to the premiere for the fans on digital media, the channels host a special social media trivia contest, which tests viewers knowledge about Wonder Woman through a pop quiz on Instagram stories. The contest will have 3 levels, wherein audience can play level 1 on Movies NOW, then hop on to MNX for Level 2 and finish the final round on MN+. Integrating  the theme of the movie to showcase a sneak peek into the personal lives of real life Wonder Women, a fun Q & A reels featuring  popular celebrities and news anchors is also being rolled out across the Instagram pages of the channels.

Offering viewers, a chance to express their creative side and design their version of an Indian Wonder Woman, the channels have commenced #IndianWonderWoman contest, inviting participants to share their artwork on their SM handle and submit their entries by tagging Movies NOW, MNX and MN+. Selected winners and their sketches will be featured across the social media platforms of the channels and they will also win an eclectic mix of Wonder Woman goodies.

On the premiere day, Movies NOW will host a one-of-a-kind Watch and Win contest, where viewers have to tweet the letters they spot on TV with the hashtag #WW84Words, tagging the channel. Evoking nostalgia with some of the most memorable and iconic articles from the 80s, MNX on October 31st will host a contest, where viewers can identify the items that will flash on the screen and tweet their answers using the hashtag #WW84Nostalgia, tagging MNX.