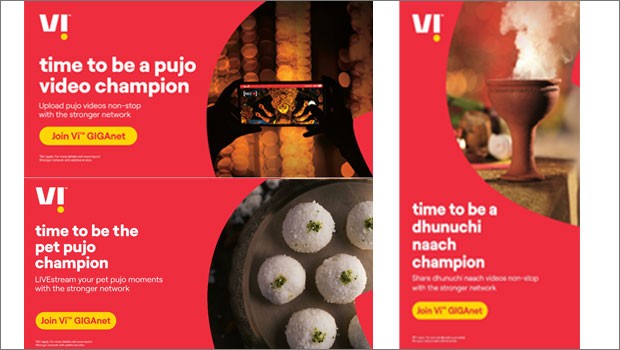 Telecom operator Vi has announced their Durga Puja campaign ‘Be a Pujo Champion’, bringing many moods of the festivity together.

Pandal hopping, gorging on foods, Dhunuchi Naach are some of the inseparable moments associated with Durga Puja. In today’s digital, social media savvy world, everyone likes to capture the essence of these moments and share it with the world through a video. The Vi Pujo Champion rides on that sentiment and encourages them to share their Pujo moments with the world on the ‘Stronger Vi GIGAnet’ network.

With the campaign, which plays heavy on OOH and digital, under the theme ‘Be a Pujo Champion’, Vi celebrates three key aspects:

Food is an intimate aspect of the festival. Be it the Bhog with Alu Dum, the Prasad, or queuing up in front of a restaurant, Vi encourages the users to become a “Pet Pujo Champion”  by Live Streaming such moments with Stronger Vi GIGAnet network.

Dhunuchi Naach (Dance with the incense burner) is one of the most popular affairs of Durga Puja where men and women irrespective of dancing expertise, show off their skills with the Dhunuchi in the rhythmic beats of Dhak. And Vi urges the users to showcase this unique dance style to the world with Stronger Vi GIGAnet network and become a ‘Dhunuchi Naach Champion’.

Videos of Pujo are a great way to reflect on the joyous moments. Be it chanting of shlokas clubbed with the incense smoke, or pandal hopping, these make for great frames related to Durga Puja. Vi users can champion these videos and share it on their social media platforms with Stronger Vi GIGAnet network and become the ‘Pujo Video Champion’.

Kicking off the campaign with OOH, Vi has installed banners, hoarding across Bengal, urging people to become Vi Pujo Champion with Stronger Vi GIGAnet network. On the digital front, social media and Vi’s own digital assets will play a pivotal role in amplifying the reach.

During the Puja days, Vi will run ‘Pujor Shera Abashon’ (best housing complex) competition in which about 50 residential complexes will take part. The top three will be entitled to win cash prize and will be felicitated by a celebrity.

Shivan Bhargava, Cluster Business Head, East, Vi, said, “Vi wishes all its users a very Happy Sharod Utsav. Durga Puja is just not just a festival for Bengal, it’s a sentiment. During the times of social distancing, it is our humble initiative to connect friends and family digitally so that they can share their Puja experiences with their near and dear ones, who are unable to meet in person, to enjoy the festival in its true spirit.”

Tags: Vi Durga Puja Be A Pujo Champion
Advertisment
More from this section