TV9 Bharatvarsh to host ‘Satta Sammelan’ in Lucknow on October 4 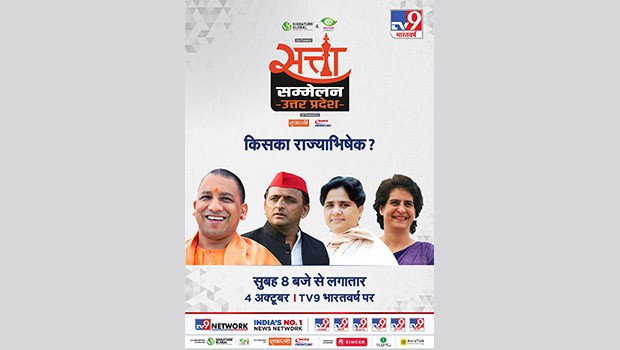 With less than six months to go before Uttar Pradesh holds its state elections, TV9 Bharatvarsh is set to host the first ever conclave ‘Satta Sammelan – Uttar Pradesh’ in Lucknow on October 4, 2021.

Among other aspects, the Conclave will dwell at length on key issues facing the state as it goes to polls.

As political parties gear up for an intense electoral contest in India’s largest state, TV9 Bharatvarsh, becomes the first ever media platform to organise a conclave on such a large scale. The event will see a number of influencers from the world of politics, religion, civil society and arts and culture in full attendance.

As part of this day-long session, top leaders from both ruling and opposition parties will throw light on key poll issues. The Conclave will see multi-format sessions including a host of Panel discussions and exciting one-on-one conversations on diverse topics such as “Ayodhya”, “Brahmin Vote”, “Caste Calculus and OBC Votebank”.

Yogi Adityanath and Akhilesh Yadav will be star speakers in the prime time band of the Conclave.

Speaking about the Conclave, Barun Das, CEO, TV9 News Network, said, “UP, which goes to polls early next year, holds a distinct status in the Indian polity given its primacy in deciding the outcome of general elections. As the No. 1 news network of the country, we will ensure that our 40 crore weekly TV viewers and digital audiences across the length and breadth of our country, get the most insightful and exhaustive coverage of this important event.