The kids category continues to be under indexed, says Nina Elavia Jaipuria of Viacom18 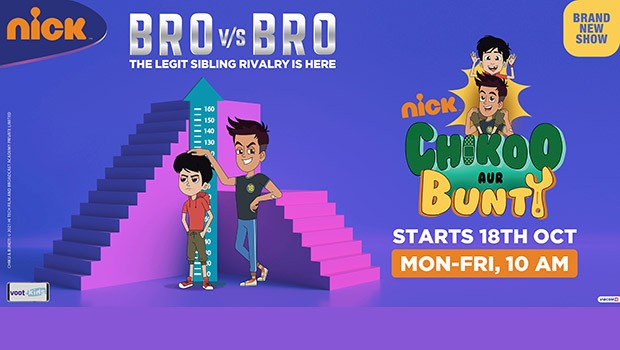 Launching the 11th IP ‘Chikoo aur Bunty’ in kids category, Nina Elavia Jaipuria, Head, Hindi Mass Entertainment & Kids TV Network, Viacom18, said that every IP from Viacom18 has proven to be a runaway success with kids as well as advertisers.

Their last IP “Pinaki & Happy - The Bhoot Bandhus” which was launched on Sonic, has contributed greatly to the success of the channel which earlier stood at sixth or the seventh number. “Nick is in the number one position but what’s encouraging and heartening is that Sonic has come all the way from behind and taken the second position,” said Jaipuria.

The kid’s genre had grown dramatically in the covid period however, the viewership is now stabilising and has seen a decline of 9-10% but is still above pre-covid levels revealed Jaipuria. The network is leading the category with a 33% market share which is followed by Disney (26%), Turner (17%), Sony (8%).

From an advertising perspective, they are on top of the ad revenue chart with a 35% ad revenue share, followed by Disney who has a 25% share. Jaipuria stated even as the advertising share for the genre has grown, it deserves a better share.

“Barring last year, the genre share and the category also continue to grow in single digits, however, continues to be under indexed, unfortunately.  The genre is about 7% of the total TV viewership, it went up to 9% during Covid times. It has come back and stabilised at 7%. Unfortunately, the needle has moved out of 2% adex to about 3-4%. So we have managed to move the needle, but not as much as we really deserve from the viewership share that we have,” said Jaipuria.

However, speaking about the advertising share from the network’s perspective, she stated, “Because we enjoy leadership position, it helps us to command and get the premium we deserve.  Particularly in a situation where there is always a demand and supply issue where demand is far more than supply. It is a good problem to have because it enables us to take our rates up. Advertisers are willing to do that when you know that there is a leading franchise, which has led for so long.”

‘Chikoo aur Bunty’ will be launched on Nickelodeon on October 18. The show is “Powered by” Phillips and in association with Pediasure and Flipkart shopsy.

Speaking about the concept of the show, Anu Sikka, Head - Creative, Content & Research, Kids TV Network, Viacom18, said, “At Nickelodeon, our journey with local content kicked off almost a decade ago. We have always introduced our young viewers to storylines and characters that are relatable, engaging and clutter-breaking. The success of our past IPs reinforces our commitment and drive to serve our young audience with content that continues to raise the bar. The launch of our new IP, ‘Chikoo aur Bunty’ will showcase a realistic representation of the relationship between two siblings who compete for the smallest of things but love each other equally. We look forward to enthralling kids with this unique concept of sibling rivalry and unlimited dose of comedy.”

Sikka also said they have the largest library of local content with 700 plus hours of content, which basically means approximately 1500 plus episodes. This has been done over a period of 10  years as they have not rushed into launching three or four IPs each year. “For us, it has been a very slow and steady race. The focus of this has been on quality rather than being on quantity.”

Speaking about the show, she said, “Chikoo aur Bunty is a slice of life show and they aim to achieve relatability with the characters. All children have experienced sibling rivalry and there is not one child who will not be able to relate to the show.”

To market the show, a 360-degree marketing campaign is in place a lot of which will be pivoted to digital. Jaipuria revealed that while they will leverage their network channels, they will also advertise outside the network on GEC, music and movie channels.

“You will see us on Youtube kids. We are looking at the final matches of IPL with Diseny+Hotstar. You will see us with a lot of stuff on social media. There is a whole lot of short-form content, dance challenges across short video platforms,” she said.

Apart from the new IP, the channels are also gearing up for the festive season with newer episodes of shows. “We have a whole lot of Diwali and Christmas specials planned. We also have many TV movies premieres planned. That's a big success not just for viewership but also get a whole lot of advertisers on board who come to sponsor the movie. We also have Christmas specials and will celebrate children’s day. Hence a lot of action is planned for the festive quarter.”

Asked about why are more IPs in the kids’ space have a boy as a protagonist and how are they balancing the notion, Sikka and Jaipuria stated they look at the audience’s viewing patterns rather than looking at it from a gender perspective.

“Boys seem to be hanging on to this genre far more. They are more loyal to the genre. Whereas, we have seen the girls exiting the genre much earlier. They are moving towards live-action and general entertainment much earlier. However, there is a lot of peripheries that you see. On properties like Marsha and the Bear, Peppa Pig you see a lot of female protagonists there. This is a white space that we are looking at to understand if we want to work and we should,” explained Jaipuria.

Sikka explained that for the kids between 9-12 years of age, most of the shows are boy-centric. “When we come to a pre-school category, it is dominated by girls. There is Dora the Explorer which is very big for us, Marsha and the bear, which is today perhaps leading the show on Nick Jr. The other show we have launched is Butterbean’s cafe which is a girl-centric show.”

“Many of our shows like Motu-Patlu, Pakdam Pakdai are gender neutral and appeal to both genders equally,” Sikka concluded.