Fabindia is the latest brand that has seemingly offended people through its Diwali festive campaign and collection called ‘Jashn-e-Riwaaz’.

Twitterati has alleged that the name is offensive and does not sit right with the cultural context of the Diwali festival.

“As we welcome the festival of love and light, ‘Jashn-e-Riwaaz’ by Fabindia is a collection that beautifully pays homage to Indian culture,” said a tweet from the brand, speaking about the collection.

However, the tweet is now off air and the campaign seems to have been taken down from Vogue and other platforms.

Here is the screenshot of the tweet which was later deleted by the brand. 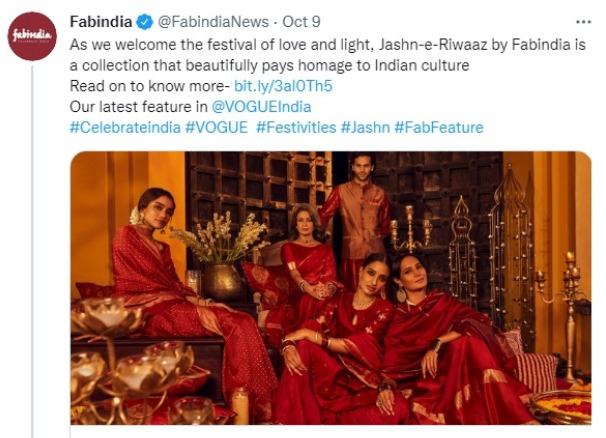 Questioning the style of the attires, the audiences said the models in the campaign were not sporting a ‘bindi’.

Taking to Twitter, Tejasvi Surya, MP and National President of the BJP Yuva Morcha, said, “Brands like Fabindia must face economic costs for such deliberate misadventures.”

This deliberate attempt of abrahamisation of Hindu festivals, depicting models without traditional Hindu attires, must be called out.

And brands like @FabindiaNews must face economic costs for such deliberate misadventures. https://t.co/uCmEBpGqsc

Wow @FabindiaNews great job at de-Hinduising Deepawali! Call it a ‘festival of love and light’, title the collection ‘Jashn-e-Riwaaz’, take Bindis off foreheads of models but expect Hindus to buy your overpriced, mass produced products in the name of ‘homage to Indian culture’! https://t.co/S47g1ArUbB

Jashn-e-Riwaaz !
For a moment I thought it was Eid again !
On the occasion of Deepavali surely you could have given your patrons a culturally appropriate celebration of your wares. The Mughal-e-Azam fixation is so done & boring.

Thanks @FabindiaNews will look elsewhere.

Soon, #BanFabindia started trending on Twitter and is gaining traction.

Earlier this week, online learning platform Unacademy faced backlash on social media over a question from a possible question paper for students. The question mentioned about Hindus pelting stones at Muslims for chanting slogans in a procession.

Confirmed from @PrakharBansal14 that @unacademy indeed put out this question in an online assignment on IPC. They have now removed it

Question says Muslims are carrying out a “rally on Eid” (rally on Eid, really?) and Hindus pelted stones on the rally as it hurt their feelings! pic.twitter.com/UK8KJtSHOe

Unacademy later apologised and said the questions in the mock test were prepared by a third party and had been taken down.

Recently, brands such as Manyavar Mohey have also been called out for allegedly hurting the religious sentiments of people.

Last year, jewellery brand Tanishq drew sharp criticism for showcasing a ‘god bharai’ ceremony by a Muslim family for their Hindu daughter-in-law. After much controversy, the brand apologised and took down the communication.

While some experts say brands should be vocal and stand up for causes, others ask brands to stay away from taking any religious stand in their communication.