Content is a tricky game and given the pressure from clients, both agencies and publishers often make mistakes. But what happens when the client is a state government and the ad meant to promote the state with its Chief Minister's picture on it has an image from another state, ruled by a rival political party? 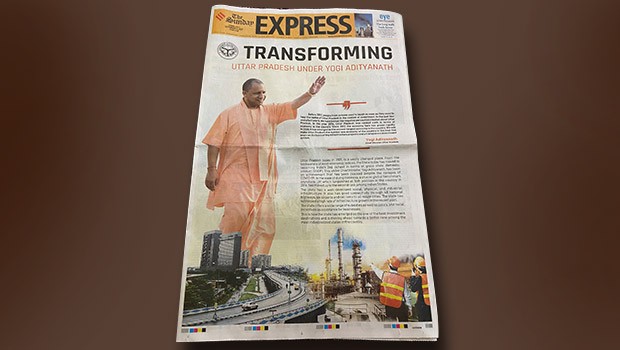 An advertorial published by the Uttar Pradesh government in the Sunday edition of The Indian Express, showing an image of a Kolkata flyover underneath Chief Minister Yogi Adityanath's cutout, went viral on social media.

Opposition leaders and netizens trolled the UP government over the goof-up. But later the newspaper issued a clarification, saying it was an error on its part, as it was its marketing team that had designed the creative.

“A wrong image was inadvertently included in the cover collage of the advertorial on Uttar Pradesh produced by the marketing department of the newspaper. The error is deeply regretted and the image has been removed from all digital editions of the paper,” it tweeted.

A wrong image was inadvertently included in the cover collage of the advertorial on Uttar Pradesh produced by the marketing department of the newspaper. The error is deeply regretted and the image has been removed in all digital editions of the paper.

A story published in online portal The Wire said The Indian Express, the newspaper that published the ad in its Sunday edition, does not take responsibility for ads and content as per its advertising policy. The website questioned whether the apology issued on social media was a compulsion because of commercial or political considerations.

The Wire ignored the word ‘advertorial’ used in the apology tweeted by The Indian Express because, perhaps, it suited their editorial line, said an advertising agency leader on the condition of anonymity, when BestMediaInfo asked how advertorials work.

“An advertisement is an art work sent by the client to the publication while advertorials are a joint effort by the client, its advertising agency and publication’s editorial and marketing teams. If you read the statement by The Indian Express, it is clear that the entire 4-page advertorial was designed by the newspaper. And not by the UP government,” the leader said.

Other experts in the branded content and advertising industry confirm that the creatives for such campaigns are mostly done in-house by the publishers with the final approval coming from the client, which in this case was the Uttar Pradesh government.

The ad goof-up, however, became political because the UP elections are only a few months away.

But why did The Indian Express apologise if the final approval came from the UP government or their agency?

“Newspapers frequently take on the task of making the creative for both government and private clients. This was one such incident where the newspaper's team was tasked with designing the 4-page advertorial and since the creative, albeit approved by the client, was designed by the newspaper, owning up to their mistake was a responsible thing to do,” said the expert we quoted above.

“One cannot ignore the fact that the financial implications must be at play looking at the current business environment, but connecting that with owning a mistake is unwanted. Indian Express did their part and, hence, it is also incumbent on the agency of the UP government to tender an apology for overlooking the mistake," said another industry observer.