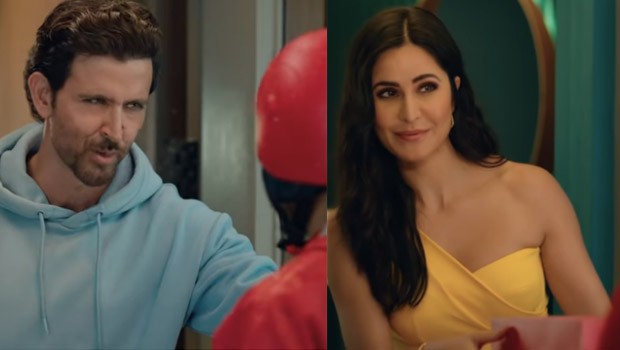 The films featuring Hrithik Roshan and Katrina Kaif are an attempt by Zomato to thank their delivery personnel who are at service no matter what the situation is, and send out the message, ‘Har Customer Hai Star’.

Netizens have called out the brand over the ‘poor work conditions’ of the staff, which they say is in sharp contrast to what the ads show.

In the second film, Kaif is thanking the delivering personnel for delivering the pizza on time, and complimenting him for being the first to show up at her birthday party. She expresses her desire to share her birthday cake but the person leaves since duty calls again.

The campaign is conceptualised by McCann Worldgroup India.

As soon as it was released, the ads sparked outrage online as netizens pointed out that the food delivery app seemed to be masking the real issues with this ode to its delivery agents.

In the past, Zomato has been publicly called out by executives (anonymous) for not compensating them properly and forcing them to over-work.

This issue highlights the loopholes of India’s gig economy workers (who are not employees of the company but are paid per task rather than a fixed salary with benefits, and are labelled as independent contractors) and how this culture is booming among the delivery apps.

Amid all these allegations and criticism, the new ad films starring celebrities seemed to be tone deaf to many, who took the company to task on social media.

Instead of paying celebrities big money for ads to whitewash their horrible treatment of delivery staff, Zomato can just pay their employees a decent living wage. Also who created this horrible ad? This only exposes Zomato for how inhumanely they treat their workers https://t.co/9h30wbXa4E

I don't want my groceries delivered in 10 or 20 minutes. I would rather that the delivery person takes his time to safely deliver. Same for my food. Raise your voice. Tell companies like Grofers, Big Basket, Swiggy and Zomato:There is no market for abusing their delivery persons

A well meaning ad to portray that every customer is important and so is their time but it's being criticised rightly as the guy doesn't have any time for himself. Both can be worked out without exploitation and calls for shutting down with humane strategy and less profit.#Zomato https://t.co/i117xot8MJ

When would Indians stop glorifying horrific working conditions like that #Zomato ad? Have a life or have little life at least. Value of a human being is ZERO. Now I understand why that @swiggy_in lady delivered my foods while it was raining. It's demanded by THEM.

This ad is such a self own. Zomato essentially boasting of how their drivers are under pressure to deliver, rain or shine https://t.co/aTD5XE5gfI

Some, however, came out in defence of Zomato too, saying the delivery executives were fairly paid.

Bashing #zomato has become the “in thing” these days. Some have no pulse of ground realities like unemployment issues, others wages etc. Irony is - the people who are batting for better salaries for delivery partners would be earning lesser than these partners themselves!

A few weeks ago, Zomato had released another video featuring comedian Danish Sait on similar lines. In the film, Sait is seen as a delivery agent, riding around Bengaluru to deliver food. It too drew flak from netizens for not depicting the realities of a delivery professional. After the backlash, the comedian took down the video and apologised.