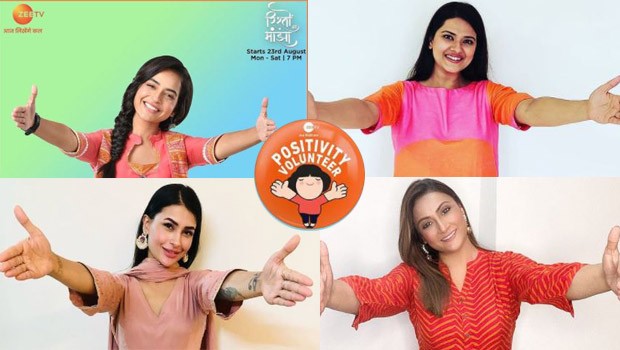 Zee TV has introduced two new narratives ‘Rishton ka Manjha’ and ‘Meet’ at 7 pm and 7.30 pm from August 23. The shows make viewers look at life from a fresh perspective. The channel decided it was time to set the context for the two new stories through an interesting social experiment and bringing on board the right influencers to amplify the chatter around the subjects that the two shows touch upon.

‘Meet’ follows the journey of a spirited Haryana-based girl who is not only the sole bread-winner of her family but takes full responsibility of her household, is a fixer for everyone’s problems, serves as a delivery agent and in a nutshell, is the ‘ghar ka chiraag’— a tag most families unfortunately associate only with the son of the house. Breaking these gender stereotypes and proving that even girls are fully capable of juggling responsibilities both inside as well as outside the house, the show makes a strong statement about gender roles.

To spark off discussions on the subject, the campaign for ‘Meet’ began with a video of a conservative ‘Tauji’ expressing his problematic views on gender roles, advocating patriarchy and speaking of what is a man’s prerogative versus a woman’s. While his staunch, sexist views ensured that the video began to spread like wild fire across WhatsApp groups, creative netizens began making comical memes mocking his bigotry.

Across meme platforms such as RVCJ media and over 200 other meme pages, Tauji’s video cumulatively garnered 5 mn+ views with thousands of comments and mashups created on the same. What was disconcerting, however, were certain sections of society that actually agreed with Tau ji and gave him high-fives!

Feeling almost attacked by Tauji’s rant about gender roles, actress Huma Qureshi and the internationally-acclaimed female wrestler Babita Kumari Phogat lashed back at Tauji, posting sarcastic video replies on their respective social media handles. Within a matter of hours, #TaujiBasKaro and #TasksSeeNoGender began trending with a deluge of people sharing their views on gender roles, most people lauding Babita and Huma for having taken a stand against gender discrimination.

With the decibel of buzz on the topic at its peak, Huma revealed that while the Tauji video was a social experiment orchestrated by Zee TV to draw attention to this disturbing mindset still prevalent in society, she being a firm believer of gender equality, knew she had to join in and raise her voice against Tauji’s views. The actress then went on to laud Zee TV on its attempt to address this pertinent subject through its upcoming show Meet, thereby setting the context to the show’s core premise beautifully. Tauji’s video, the strong reactions by Huma Qureshi and Babita Phogat were widely splashed by the media, resulting in a robust PR surround for the show.

Aparna Bhosle, Business Head, Zee TV, said, “Our 7 to 8pm slot now packs in twice the excitement for our viewers with two new stories that will not only entertain but inspire and spread positivity amongst our viewers. While Rishton Ka Manjha talks of the power of optimism and never losing sight of the light at the end of the tunnel — an extremely relevant message in the current context, Meet brings you a spirited protagonist who will shatter gender stereotypes and prove that a girl, today, is as adept, if not more, at juggling responsibilities both within and outside the house. We look forward to our audiences falling in love with these new members of the Zee TV kutumb.”

Huma Qureshi said, “It seems like Tauji’s views on gender roles haven't evolved over the past couple of centuries. While he may be a fictional character, he represents the views of countless families who, even today, believe that a woman's place is in the kitchen and a man must fulfil all other worldly responsibilities. Sad but true! I’m really happy Zee TV took an initiative to address this issue through the mechanism of Tauji and when I saw how this extremely relevant topic was being pulled forth for discussion, I knew I had to take a stand. My parents have never differentiated between my three brothers and me. Be it changing lights during Diwali, preparing Biryani during Eid or taking care of the finances, we were always all equally responsible. It’s good to know that the channel is all set to present the story of Meet, where a spirited girl from Haryana will prove yet again that girls can very well be the ‘ghar ka chiraag’, taking complete charge of a household. I am looking forward to watching the show and I wish them all the luck for their new venture.”

Launching on the same day as Meet, ‘Rishton Ka Manjha’ explores the intense love story of Diya and Arjun who, despite being players of the same sport, are at the opposite ends of the spectrum when it comes to their approach towards life, hope and positivity. The lead protagonist Diya is someone who, irrespective of the curveballs life throws her way, stays afloat saying “Kuch toh tod nikaal hi lenge”.  On the other hand, Arjun is a former badminton champ who has given up on life after a scandal jeopardises his career! How Diya shines the light of optimism and reinforces Arjun’s belief in her philosophy – “If all isn’t well, it isn’t the end” forms the crux of the show.

To establish the core grain of Diya’s optimistic personality, her never-say-die approach and the uplifting impact a person like her can have on the mind of someone like Arjun, Zee TV launched the #BeingDiya campaign. Given the current context of isolation during the pandemic, many of us have been through feelings of uncertainty, withdrawal and gloom. Diya, in a plea video shared by Zee TV’s Instagram account, urged people to come forth and ‘be a diya’ for those in need of positivity by starting a chain of hugs on social media. Her post requested people to sign up as ‘Positivity Volunteers’ via a sticker and tag at least five of their contacts, while posting their own selfie with arms stretched wide open, connoting a virtual hug. While Diya kick-started the initiative, it wasn’t too long before some actors of the television industry like Urvashi Dholakia, Kratika Sengar and Pavitra Punia jumped in and supported her in this quest. In their own individual ways, each of them sparked a spirit of positivity among their set of followers and the chain of virtual hugs and the #BeingDiya movement only gathered momentum.

Taking the initiative on ground, the quest for positivity volunteers reached Ahmedabad and Delhi where camera-embedded screens were installed at the Himalaya mall and the Vegas mall, Dwarka. These two-way screens enabled people walking into the malls to see people in the other city and give them a virtual hug. Anyone participating in the activation would pledge to be a diya for those in need and stand to be featured on a wall of positivity as a positivity volunteer. The on-ground initiative saw an overwhelming response where thousands of people became positivity volunteers at the mall activation that took place over three days in Ahmedabad and Delhi. The #BeingDiya campaign was very effective in its mission of spreading positivity and building the character of Diya as a symbol of hope and optimism in the run-up to the show’s launch.