The show will bring three chicks who constantly try to outrun a hungry fox. These adventures between the characters will be further turned into a laughter riot by Jaaved Jaaferi and Mubeen Saudagar 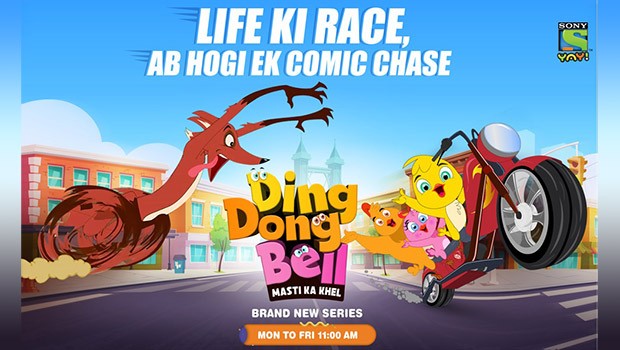 The show will bring the three chicks who constantly try to outrun a hungry fox and create funny plot twists to escape him. These rib-tickling adventures between the characters will be further turned into a laughter riot by maestros of voiceover art, Jaaved Jaaferi and Mubeen Saudagar.

In every episode, kids’ beloved characters Aka the Kukkads - Ding, Dong, and Bell are chased by a hungry fox named Bhukkad. The hungry fox is forever on the prowl for these chicks who are always at the ready to foil his plan. Each chick equipped with a special talent of Brains, Brawn and Beauty is in the race to outsmart the fox and hence creating a laughter riot for kids. Every failure angers the determined fox to devise even more elaborate plans to outwit them in each passing episode, which usually ends up being a wild chick chase.

Sony YAY! will also introduce the Kukkads and Bhukkad to kids through an exclusive watch party for the sneak peek of the show. Kids will get to play exciting games with their friends and enjoy with show-themed Instagram filters.

As kids await the premiere of their favourite characters in a new avatar, they also get an exclusive chance to get a sneak peek of the show, register https://bit.ly/Mastikakhelwatchparty  for the Ding Dong Bell Watch Party.

Leena Lele Dutta, Business Head, Sony Pictures Networks India, Kids’ Genre, said, “Ding Dong Bell, Masti ka khel is our pre festive treat to kids which is packed with a hilarious ride doubled with funny commentaries by the best artists of the industry. While we have a barrage of new content lined-up for the upcoming festive season, this is to give our young audience a taste of what they can expect in the coming months and continue serving them all their favourite characters & narratives.”