Snapdeal eyes a comeback during the festive season, will launch tactical ad campaigns

The e-commerce platform plans to launch tactical campaigns around the festive season that builds perception and reintroduces Snapdeal 2.0 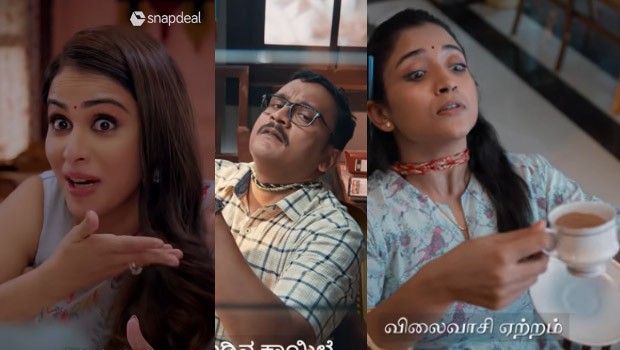 Snapdeal, once a leading e-commerce platform in India, is eyeing a comeback during the upcoming festive season. The e-retailer that lost out to Amazon and Flipkart is planning to launch tactical ad campaigns during the festive months.

Talking about how it plans to undertake its marketing campaigns and get the maximum return on it, Soumyadip Chatterjee, Director, Brand Marketing,  Snapdeal, said, “At Snapdeal, we have a very high knack for measurability and ROI. Over the past six months since we restarted the brand campaigns for Snapdeal we have done a lot of experiments to understand which channels work for us and to understand the balance between reach and frequency. We will be building our festive campaign on the basis of these learnings.”

The platform plans tactical campaigns around the festive season that builds perception and reintroduces Snapdeal 2.0 at a brand level.

Chatterjee said these campaigns will be more customised since Snapdeal has extensive customisation programmes available. “We will be basically taking user input and helping users with the right kind of discoveries through our AI and the ML methodologies. The creative bit of these campaigns is still being worked out,” he said.

It is aiming to have the proposition of greater value products with lesser price—the similar proposition it had with its recent campaign ‘Brand Waali Quality, Bazaar Waali Deal,’ which ticks all the boxes with the prudent, value-conscious Indian buyer.

At the heart, he said the brand’s promise is of democratising aspirations.

“Eighty per cent of our customers are from tier two and three markets who probably don't have access to big malls anyway. Even if they have a physical value retailer, probably that's only one or two in the vicinity and they can't access it regularly. So when Snapdeal gives this kind of experience of value e-commerce, then no matter where you are or how remote you live, you can actually fulfil your aspiration,” he added.

While the campaign was hugely promoted on digital, he said mainline media too is very much a part of the mix for the platform.

Explaining the reason behind its major focus on digital, he said, “Over the past few years, we have seen a huge amount of newer tier two, tier three value audiences who have come online. The engagement of those people online is also much higher, and it's better measured. I'm not saying that the mainline campaign cannot be measured, but the measurement for online campaigns is slightly more accurate. Also the feedback is real time. We are evolved in terms of thinking about marketing and so for us it's not really digital versus anything else for us. Based on the occasion, the requirement and the TG and the product, we basically decide which channel is the best for us.”

In terms of making shopping a holistic experience for the buyers, Snapdeal is enhancing its focus on discovery-led models.

“The hallmark of the experience we're trying to build is the greater value in lesser price. So the bazaar (market) is basically predictable and buyers know exactly the quality and price they will get there. There is no fooling around with the customer and this is the sort of experience that we are trying to give them through the discovery led model we have,” he said.

With technology, the platform is able to comprehend the browsing and buying behaviour of shoppers, and then facilitating their swift search for a product that would be useful to them. From a tactical perspective, it is working around video, voice and vernacular with the central idea of how to help users discover products better and not how to sell better.

Prior to launching the campaign ‘Brand Waali Quality, Bazaar Waali Deal’ in southern markets, including Karnataka, Andhra Pradesh, Telangana, Tamil Nadu, and Kerala, it had launched the Hindi version of it with a series of 10 videos.

Asked why it was launched for the southern market specifically, Chatterjee said, “We received a very overwhelming response on our core Hindi campaign, especially in the core HSM markets in Maharashtra, even in Gujarat and West Bengal, apart from Rajasthan, Madhya Pradesh, UP and Bihar. What we realised from here is that the anti-brand positioning that Snapdeal has taken is fairly rare in the Indian market, because most brands try to be me too and just talk about the same thing. Our challenger positioning to mainly communicate the value proposition struck a chord with the audiences. No other ecommerce platform today is blending the requirement for great quality products at low prices. We witnessed all the encouraging signs in the Hindi market and South India has always been in the radar because we have a very good footprint in South India. So as a precursor to the festive season, we went ahead,” he added.

The campaign in Hindi:

The campaign in Kannada:

The campaign in Tamil:

The campaign in Telugu:

The campaign in Malayalam:

The platform generally measures the ROI for brand marketing in terms of share of voice across search engine result pages across social and influencer communication. It closely tracks new visits, which are coming directly to the platform. Having tested multiple metrics in the past, Chatterjee said the brand has realised that the direct visits are sort of the holy grail of brand marketing for it.

After the campaign, he said they have witnessed almost 2x growth in direct visits over the past three-four months.

Taking a unique approach in the Malayalam speaking market, it is running the campaign with YouTube Creator Promotions and Facebook Branded Content Ads and has partnered with 30+ creators/influencers to create 100+ content pieces that will reach out to relevant audiences in Kerala and other southern states.

“It is not something that we are doing as a piecemeal; we had started it from April in the HSM market only initially. Now we have begun in the south market as well. It's a very important experiment, not just for Snapdeal but retail in general in India, because I don't think anybody would have done that for any market before,” he said.

Speaking on the relationship with the creators and influencers to keep a content hygiene check, he said the platform has been extremely meticulous and structured in the thought process while working 100 plus content pieces.

“The campaign with creators has to be structured and planned way ahead. We have had extensive briefing sessions with the creators of every level and have really spent some time curating the influencer and informing them about the product and the brand,” he added.

Discussing the impact of Covid-19 on the ad spends, he said, “It was limited simply because whenever we had a lockdown in a particular state, or in a particular region, our ad spend was stopped. When we started seeing people shopping again, or getting back to normal life, we resumed normal levels of ad spends.”

In terms of its business, despite a minor impact Snapdeal bounced back pretty strong on the back of innovation and agility.

Chatterjee said that the platform did a lot of problem solving during this period to keep the business sustainable to make sure the quality is being delivered and the user experience is not compromised.

“In the initial weeks, we worked very closely with the government, local authorities and the SOPs to design operating protocols so that deliveries could be resumed. We on-boarded a lot of local sellers since intercity travelling was restricted. We added a lot of inventory in terms of groceries, home hygiene products, non-prescription medicines and daily items. This helped because the downtime for a seller to be onboarded got reduced drastically and that is where the impact was lessened and we could bounce back to easily,” he said.

As of now, it is sitting somewhere around 3x, the number that it had during last year at the same time. Also, it had added six million users in the first six months of the pandemic, last year.

From a third wave perspective, it has already prepared the team in terms of vaccination and has extended work from home.