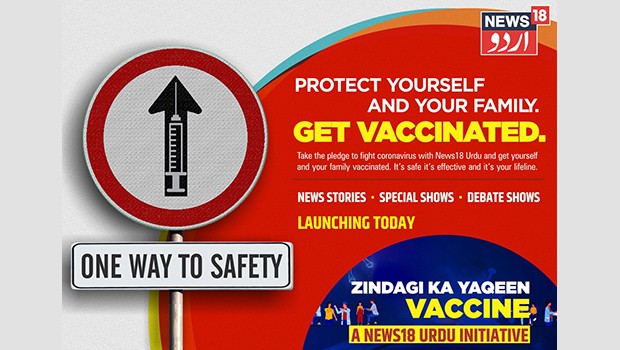 There is a strong consensus across the world that the strongest defense that mankind has against the dreaded Coronavirus is vaccination. While many people have gone ahead with their vaccination, there are some who still harbor reservations. News18 Urdu has undertaken upon itself the task of reaching out to its viewers from across the country including the large Muslim community in the country and encouraging them to get vaccinated in large numbers.

This special month-long initiative “Zindagi Ka Yaqeen: Vaccine” would aim to identify areas and communities where the rates of vaccination are low and focus its campaign on the same through case studies, on-ground stories and use of influencers and community leaders. The campaign will attempt to bring multiple views and perspectives through a variety of content formats including debates, interviews and special interactive shows. The campaign will also engage with healthcare experts and other key stakeholders to dispel any misconceptions regarding COVID vaccination and reassure viewers about the safety and necessity for the vaccine.

The campaign was inaugurated by the Union Minister of Minority Affairs, Mukhtar Abbas Naqvi who appreciated the initiative and also stated that launching such a campaign was the need of the hour. He further appealed to the audience to get vaccinated and added that avoiding vaccination would put the people themselves at great risk. Also, many other influential people like the Minority Development Minister of Maharashtra, Nawab Malik; MOS for Minority Welfare in the UP-Government Mohsin Raza supported the initiative.

Padmashri Dr. Mohsin Wali and Dr. Swati Maheshwari also participated in the campaign’s launch and highlighted the importance of vaccination urging the viewers to support the initiative and get their vaccination done.

As the country’s leading Urdu channel, News18 Urdu understands its responsibility towards the communities and constituencies it serves. As a responsible media brand and part of the country’s biggest News Network, the channel believes that it is its solemn duty to work towards the welfare of its viewers. The campaign “Zindagi ka Yaqeen: Vaccine” is a step in this direction.