Launches Originals such as Star vs Food S2, Money Mafia, Mission Frontline with Sara Ali Khan, Say Yes To The Dress! India and others, elevating audiences’ streaming experience with additional 350 hours of programming 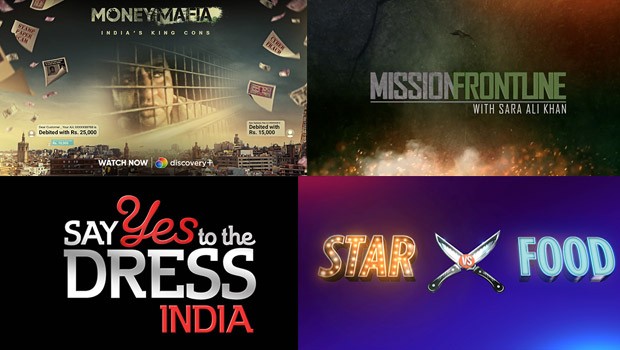 D2C streaming app discovery+ has announced an exciting slate of brand-new originals with additional 350 hours of programming with returns of its successful franchises Star vs Food & Mission Frontline.

Buoyed by the overwhelming response to season 1 of Star vs Food, Season 2 of the franchise produced by Endemol India ensures double the fun, entertainment, and cooking. Star vs Food S2 in collaboration with Korea Tourism will feature Ananya Panday, Anil Kapoor, Nora Fatehi, Badshah and others.

Sara Ali Khan will be in a never-seen-before avatar as the successful franchise of Mission Frontline returns this month. ‘Say Yes to the Dress’, an American reality television series is going to be adapted for the Indian audience, giving Indian brides a once-in-a-lifetime opportunity as they search for their perfect wedding dress. The online auditions for this have already begun and the response has been phenomenal! The show produced by ABP Studios, gives the audience an exceptional chance to experience the glitz and glamour, as celebrated stylists try to get the brides say “yes” to the elusive dress, while making it a memorable experience for the audiences.

The new discovery+ original series ‘Money Mafia’, produced by Chandra Talkies, promises to get upfront, close and real, while documenting India’s biggest scams. Launched on August 4, the series is an in-depth look at some of the biggest financial scams the country has ever seen from the perspective of the victims and the perpetrators.

Megha Tata, Managing Director, South Asia, Discovery Inc, said, “Our upcoming content slate demonstrates our constant determination of bringing original, full of life, bold and unexpected stories to our audience. By on-boarding personalities from different walks of life like Sports, Bollywood, music and comedy among others, we have made a conscious effort at expanding our reach and engaging with a new set of audience. We aim at using our platform as a medium to connect people through the art of storytelling and the line-up ranging from documentary to reality TV has something for every generation to enjoy, further strengthening our Family, Facts & Fun premise.”

Endemol Shine India CEO, Abhishek Rege, said, "We at Endemol Shine India are delighted to collaborate with discovery+ for yet another season of Star vs Food. The announcement of a season 2 within a six-month span of the first season is a testament to the success of season one. We look forward to yet another delectable season full of fun, flavour and food.”

Banijay Asia Founder and CEO, Deepak Dhar, said, “Content consumption patterns have changed drastically in the last two years. People are consuming content faster and need more if they like a certain genre. With a plethora of content available to view on OTT platforms, it is immensely challenging, yet potentially lucrative for us to create stories that resonate with the audience. Our partnership with discovery+ gives us the freedom to work on different concepts as the brand is not limited to one genre. With our next special Mission Frontline with Sara Ali Khan, we have taken our relationship with Discovery to the next level after Into The Wild with Bear Grylls. We are confident that this show will deliver a special message we want to convey to our target audience and inspire them.”

Moreover, to commemorate the month of Independence, discovery+ has a specially curated watchlist including ‘Special Operations: India’, ‘Little Singham Desh ka Sipahi Blockbuster’, ‘India: 70 Wonders’, ‘India Marvels and Mysteries’ amongst others.  Viewers will also have access to titles like ‘Surviving R. Kelly’, ‘Could I Live There’, ‘MasterChef Canada’, ‘Matilda & The Ramsay Bunch’ among others.

Money Mafia: This show will show one how to safeguard their ‘Money’ from the ‘Mafia’s’. The series that will venture into the dark world of white-collar crime spread across multiple seasons will investigate scams and uncover crimes such as cyber fraud, ponzi schemes and stock market manipulation among many more.

Star vs Food Season 2: Continuing the previous format, the new season will feature weekly episodes of celebrities going behind the scenes to cook up scrumptious dishes for their loved ones under the complete guidance of culinary experts. The celebrities will be cooking in some of Mumbai and Delhi’s contemporary casual restaurants, trying their hands at preparing varying cuisines, promising nothing but flavoursome entertainment for viewers across the country.

Say Yes To The Dress: Originally an American reality television series that focused on profiling brides as they search for their perfect wedding dress, it has now been adopted into an eight episodic reality television series following the lives of 16 ‘to-be-Dulhans’ who are trying to be in control of things. The show will feature the process of stitching in all details that make up the tapestry of our brides saying ‘Yes to the dress’.

India: 70 Wonders: In ‘India 70 Wonders’, the makers have handpicked 70 wonders that will make every Indian feel proud of their country!

India: Marvels & Mysteries – The show will celebrate the glories of the incredible India, with an attempt to unveil some fascinating facets. It aims to take viewers back in time while shining light on some of India’s most unique historical sites — their people, their place in history and their stories.

Could I Live There: The show focuses on families with life-changing job offers, who take a thrilling three-day trip soaking up and enjoying the sights and sounds of their prospective home city. Towards the end, the families decide whether to stay home or risk it all to move abroad.

MasterChef Canada S7: The format remains quite similar to its US version, a cooking show featuring Gordon Ramsay. MasterChef Canada focuses on amateur chefs competing in a series of challenges issued by judges Claudio Aprile, Michael Bonacini and Alvin Leung to become the ‘best amateur home cook’ in Canada.

Matilda & The Ramsay Bunch: The show focuses on Matilda "Tilly" Ramsay, the youngest daughter of Gordon Ramsay, whose enthusiasm for cooking rivals her father's. The series follows Matilda and the rest of her family – Gordon, Tana, Meghan, Jack, and Holly- at home and during their travels.