Viewers can submit their talent videos in music, dance, acting and other talent categories between June 29 and July 11. One mega winner from each category will get to feature in Zee Biskope Originals 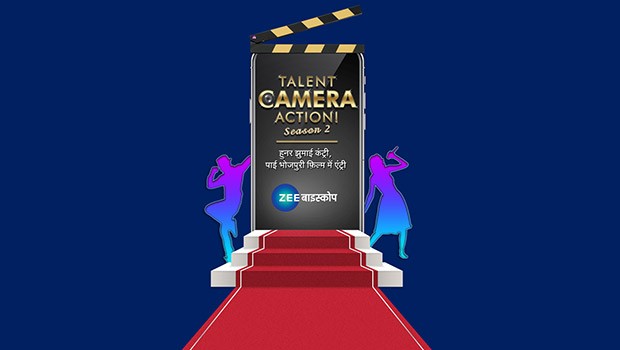 With digital cameras getting integrated in smartphones, the magical device called camera is at our easy disposal. No more do we now need to think of how many frames are left in our reels. Shooting a frame or a video is at our fingertips. June 29 is observed as Camera Day to celebrate the contribution of camera – the device that evokes smiles of memories past. Being in the arena of entertainment, Zee Biskope rejoiced Camera Day launching the first ever virtual talent hunt of Bhojiwood – Talent Camera Action. The campaign that gave viewers a platform to showcase their talents, received an overwhelming response of over 10K entries in just 8 days. It not just yielded a high ROI with 17% increment in channel reach on the telecast day over the previous two weeks (BARC; BnJ; CS2+, Mon, 29 June 2020, Reach%) but was also appreciated with 1 Gold, 1 Silver and 2 Bronze at multiple national and international award forums.

The award-winning marketing campaign steps into its second season as Zee Biskope launches Talent Camera Action Season 2 on June 29 – Camera Day. Viewers can record a 1-minute video of their talent in dancing, singing, acting or any other special talent category and send in their entries on Zee Biskope’s Whatsapp number 8291829134 between June 29 and July 11. The shortlisted entries will be judged by popular Bhojpuri celebs and winners will be announced.

The scale of gratification this season makes it again a category first from Zee Biskope. For the first time ever, a channel’s marketing initiative is facilitating a ticket to Bhojiwood. 1 winner from each category viz. Music, Dance, Acting and Special Talent will get a direct entry into Bhojiwood by featuring in Zee Biskope Originals. With this gratification, Season 2 offers a bigger opportunity for many Bhojpuri youth who aspire to earn fame through their talent. Not just that, the best entries from every category will also be featured on Zee Biskope Television and Social platforms and receive a special edition gift hamper from the brand. The videos will be showcased along with the mega winner announcement on Sunday, July 18 between 12 noon and 6 pm.

ZEE Biskope has roped in popular Bhojpuri celebrities – action star Yash Kumar and glamour queen Nidhi Jha as the flag bearers of the campaign. The duo will be seen promoting the campaign across TV and digital platforms throughout the journey of the contest. The channel has devised a robust & strategic marketing plan with the objective to reach out the novel initiative to maximum possible audience through TV, digital, radio and print. Speaking on this initiative, Samrat Ghosh, Cluster Head, East, Zee Entertainment Enterprises Limited (ZEEL) said, “Camera Day is a western concept which didn’t have much of a popularity in the region. However, starting last year, Zee Biskope curated the occasion with apt hyper local quotient that made it not just relevant but even novel for the Bhojpuri audience. The appeal of such novelty evidenced by the overwhelming response received on its debut, motivated us to launch the second season.ZEE Biskope’s viewer engagement drives have witnessed big brands partnering in the past. With a grander scale, this season of Talent Camera Action will definitely offer wider scope of brand integrations for advertisers to reach out to their relevant audience in the Bhojpuri market.” Amarpreet Singh Saini, Senior Vice-President, Bhojpuri Cluster, added, “Talent Camera Action season 2 brings two major scale-ups: the gratification of an entry into Bhojiwood & the association of popular Bhojpuri celebs Yash & Nidhi. This is in appreciation of the plethora of talented young individuals in the region who look up to such an opportunity, shelving the limitation in their resources. At ZEE Biskope, we believe in engaging with our viewers to an extent that they feel the ‘apnapan’ with the brand rather than being a mere consumer of commoditized offerings. The brand will remain true to its commitment on extending its entertainment offering beyond the magic of movies.”