Becomes the only Gujarati channel available in UK after the launch on Sky on June 1. The channel will be available to Virgin Media’s ‘Asian Mela Pack’ subscribers from June 8 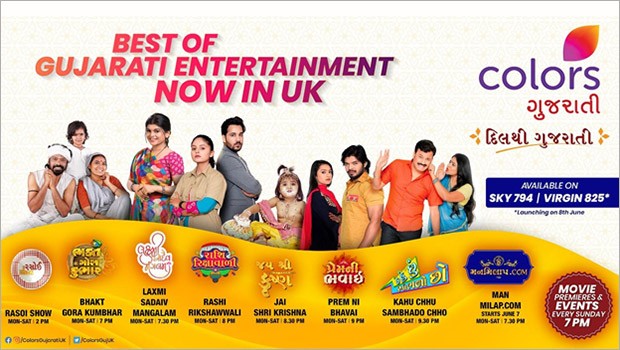 Viacom18 has launched its regional entertainment channel, Colors Gujarati, in UK. IndiaCast Media Distribution, jointly owned by TV18 and Viacom18, has partnered with Sky and Virgin Media for the channel launch. The channel is available to Sky subscribers starting June 1 on Channel No. 794 and will be available to Virgin Media’s ‘Asian Mela Pack’ subscribers from June 8 on Channel No. 825. Currently, the network offers its flagship general entertainment channel Colors along with the premium entertainment channel Colors Rishtey and the movie channel Colors Cineplex in UK. With this new addition, Colors Gujarati will become the only Gujarati language channel to be available to UK viewers. The channel will bring the best of Gujarati content all through the week along with movie premieres every Sunday at 7 PM.

Faisal Mahomed, Director, BT Media and Broadcast, said, “As a leading provider of media services in the UK, BT Media and Broadcast is at the forefront of broadcast innovation. With a successful partner track record, we’re pleased to continue to help Viacom18 capture larger UK audiences through our cutting-edge technology, and as always, we look forward to supporting Viacom18 with their growth plans - both in the UK and internationally.”

Govind Shahi, Executive VP - International Business, IndiaCast, said “We have a large Gujarati speaking population in UK and they have made their presence felt in the social and cultural fabric of the country. But currently, there is no single Gujarati channel in UK even though there are various TV channels for Punjabi, Urdu, Bangla and other regional language audiences. The launch of Colors Gujarati will fulfil this need-gap in the UK. The channel will constitute of best-in-class Gujarati content from our hugely popular India library - including fiction, non-fiction series and movies”. With this launch on both Sky and Virgin, Colors Gujarati will reach out to a vast majority of subscribers who can sample and enjoy quality content in sync with their strong socio-cultural identity.”

Colors Gujarati has been launched with its ‘Dil Thi Gujarati’ motto which mirrors the essence of the fun-loving Gujaratis in UK. Colors Gujarati creates content that cuts across age groups with genres ranging from drama, comedy, mythological shows, movies, awards, events and lifestyle. The channel will largely showcase the same shows as India. Some of the popular shows include Bhakta Gora Kumbhar, Rashi Rikshawali, Prem Ni Bhavai, Kahu Chu Sambhlo Chu and the soon to be launched ManMilap.com.