Data published by the Telecom Regulatory Authority of India says two in every three new mobile customers chose Airtel over other networks during September 2020-February 2021. During this period, over 25 mn customers joined the Airtel network 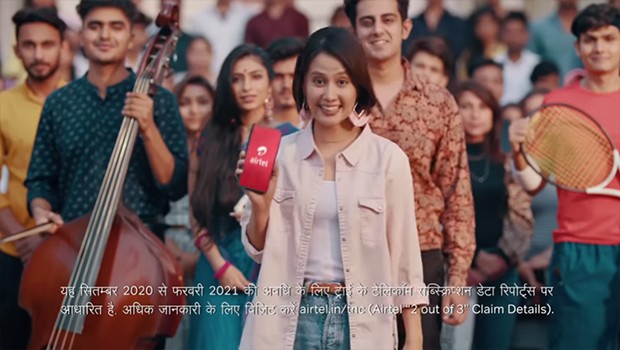 Leading communications solutions provider Bharti Airtel (Airtel) has rolled out a new brand campaign to showcase the disproportionate customer preference for its network and differentiated services.

Shashwat Sharma, Chief Marketing Officer, Bharti Airtel, said, “We have one and only one guiding principle – customer obsession. And it’s gratifying to see customers reward Airtel for constantly listening to them and innovating to serve them even better, especially at a time when the pandemic has redefined the normal. Today, Airtel has the highest number of active mobile subscribers in India and more importantly, we believe we are leading in the hearts of customers.”

The campaign has been conceived by Taproot Dentsu. Pallavi Chakravarti, Executive Creative Director, Taproot Dentsu, said, “When it comes to India's telco of choice, winds of change have been brewing slowly, steadily and surely. And today, Airtel's numbers are doing the talking. Our campaign is a reflection of this simple truth, told simply.”

According to data published by the Telecom Regulatory Authority of India (TRAI), two in every three new mobile customers chose Airtel over other networks during September 2020-February 2021. During this period, over 25 mn customers joined the Airtel network, underscoring the strength of brand.

Airtel has built a 5G ready network and consistently led network performance metrics in surveys by multiple global platforms. As per Opensignal, Airtel’s mobile network offers the best video and gaming experience in India. To boost this experience even further, the company has started deploying the additional 355.4 Mhz spectrum it acquired in the recent auctions for a sum of Rs 18,699 crore.

From Airtel Wi-Fi calling to Safe Pay and One Airtel plans, the company has been relentless in innovating to solve customer pain points. Airtel’s world-class digital platforms – Airtel Thanks, Wynk Music and Airtel Xstream brings to customers all the digital content and Airtel services they require.