Of 1433 million population in India, 622 million individuals are active internet users in 2020 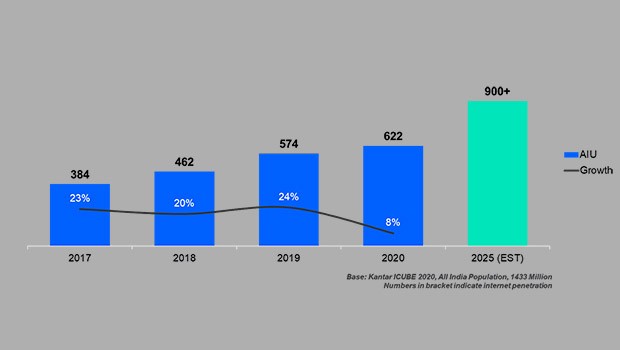 According to IAMAI Kantar  ICUBE 2020 Report, India is likely to have 900 million active Internet users by 2025 as against around 622 million as of 2020, registering a growth of about 45% in the next five years.

The report suggests that even though the Internet penetration in urban is more than 2X that of rural, usership in rural has been growing at a faster rate on a year-on-year basis. While internet users grew by 4% in urban India -- reaching 323 million users (67% of urban population) in 2020, digital adoption continues to be propelled by rural India – clocking a 13% growth to 299 million internet users (31% of rural population) over the past year.

This indicates that there’s a lot of headroom for growth in rural India and this would help in bridging the urban-rural digital divide. However, the growth rate of AIU (those who have accessed internet in the last one month) has progressively reduced over the years and is the lowest in the last four years.

Biswapriya Bhattacharjee, Executive Vice President, Insights Division, Kantar, stated, “By 2025, there would be a greater number of internet users in rural India than in urban India. Given this, the digital ecosystem will need to evolve to address the specific needs of this emerging demography. Vernacular, Voice and Video will emerge as the game changers for the digital ecosystem over the next few years.”

Small towns account for almost two out of five active internet users while the top 9 metros account to 33% of the active internet users in urban India. The report suggests, of 1433 million population in India, 622 million individuals are AIU and this translates to about 43% of the total population (across urban and rural India). However, with a sizable population not accessing the internet actively in rural India, there is huge headroom for growth in the next few years.

Mobile continues to remain the device of choice for accessing the internet in both urban and rural. Given the affordability of mobile devices along with the availability of cheaper data plans, accessing the Internet through a mobile device has clearly become the first choice, finds the report.

Digital Services have assumed great importance for India with the government actively promoting a vision of $1 Tn digital economy. Also, Internet has become a lifeline to most of us amid the Covid-19 pandemic. Almost every decision achieves fruition with the able interference and assistance of the internet. Coronavirus has made us acutely realize the importance of the internet. The internet helped businesses tide through the tough lockdowns, individuals connected with each other, used the opportunity to learn and acquire new skills, and provided much-needed meaning and reason to carry on.

The spread of the internet has been possible due to the joint efforts by the government (promoting e-governance, Digital India vision), telecom services providers (more affordable data packages, better connectivity), and Internet Service providers (popular services like digital entertainment and e-commerce, expanding content in Indian languages). IAMAI stated that the ongoing growth of internet penetration in India provides a critical platform for all stakeholders to harness the digital revolution. The pandemic has also fueled the growth. The association expressed optimism that the government’s policies, regulations, and industry’s support will further strengthen the digital footprint in India and ensure a robust digital economy in the country.