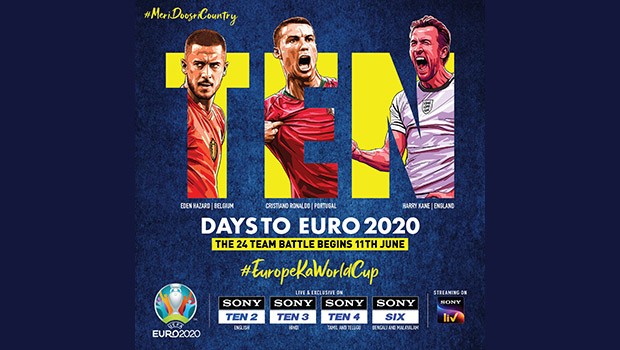 Football Fans in India can gear up for the biggest football festival with two of the most prestigious international football tournaments, UEFA Euro 2020 and Copa América 2021, on Sony Pictures Sports Network (SPSN). Sony Pictures Sports Network has announced a range of programming initiatives for the tournaments to bring the global marquee events closer to viewers in India.

SPSN will telecast UEFA Euro 2020 in six languages to reach out to a wider audience across India: English, Hindi, Bengali, Tamil, Telugu and Malayalam. UEFA Euro 2020 will be held in 11 cities across Europe featuring 24 of the best teams starting June 11  and fans can watch all the thrilling action unfold Live on Sony Ten 2, Sony Ten 3, Sony Six and Sony Ten 4 channels as well as livestream it on SonyLiv.

In a new development, UEFA Euro 2020 and Copa América 2021 will also be telecast on SPSN’s new regional language sports channel, Sony Ten 4, which will be available in Tamil and Telugu languages across the southern region of Tamil Nadu, Andhra Pradesh and Telangana. SPSN has roped in actor Rana Daggubati as the face of the channel and he will be promoting WWE’s programming in Tamil and Telugu.

UEFA Euro 2020 will also bring back Live Studio Show “Football Extraaa” hosted by Manas Singh and Arpit Sharma.  The distinguished line-up of panellists to provide ‘extraaa’ opinions, insights and analyses will include international former footballers such as Louis Saha, Luis Garcia, Don Hutchison, David James, Terry Phelan, Mark Seagraves, Ashley Westwood and Jofre Mateu along with some of the best Indian talent to have graced the football pitch such as Indian legend Bhaichung Bhutia and current superstars such as Indian Captain Sunil Chhetri, Gurpreet Singh Sandhu, Sandesh Jhingan and Robin Singh. And to give viewers back home something ‘extraaa’, SPSN will also have Andy Mitten, Adriano Del Monte and Eisha Megan Acton, reporting live from the ground across match venues and taking viewers closer to the action.

The Hindi feed will be presented by Manish Batavia, Atish Thukral, Raman Bhanot and Sunil Taneja while the Bengali feed will have Pradip Roy, Pallab Basu Mallik, Debjit Ghosh and Kaushik Varun as part of the commentator panel. The Tamil feed will feature Pradeep Krishna M., Sudhir Sreenivasan, Abhishek Raaja and Nallappan Mohanraj while the Telugu feed will be showcased by Sandeep Kumar B., Sudheer Mahavadi, Joseph Antony and Norman Swaroop Isaac. The Malayalam feed is presented by Shaiju Damodaran, Jopaul Anchery, Eldho Paul Puthussery and Bineesh Kiran.

Rajesh Kaul, Chief Revenue Officer, Distribution and Head, Sports Business, Sony Pictures Networks India, said, “Sony Pictures Sports Network is committed to presenting our viewers with the best sporting action in the world and UEFA Euro 2020 is at the forefront of it. UEFA Euro 2020 is considered one of the toughest tournaments in the world because of the high quality of the participating teams and players. Our exhaustive coverage for the tournament to serve our viewers in six different languages and a comprehensive English language studio featuring prominent names like Louis Saha, Luis Garcia, Don Hutchison, David James, Bhaichung Bhutia and Sunil Chhetri.

“We will also be telecasting Copa América 2021 which will feature, among others, Brazil and Argentina, two of the most popular international football teams. We are presenting a football festival for sports fans in India with both UEFA Euro 2020 and Copa América. We are presenting over 75 matches across 30 days and viewers can expect six to 10 hours of daily live coverage of all the biggest and most popular international football teams competing in these two events.”

The 16th edition of UEFA Euro 2020 will have 51 games for fans to enjoy over a period of 30 days. Rome’s Stadio Olimpico will host the opening match on June 12 while the finals on July 12 will be held inside the iconic Wembley Stadium in London. The opening round of matches from June 12 to June 23 will feature some thrilling encounters such as England vs Croatia, France vs Germany, Portugal vs Germany, Portugal vs France and many more.