The made-in-India action-comedy series will premiere on June 27. Cartoon Network has launched a 360-degree integrated promotional campaign, as part of which an Instagram page @EkansOnCartoonNetwork has been dedicated to the superhero 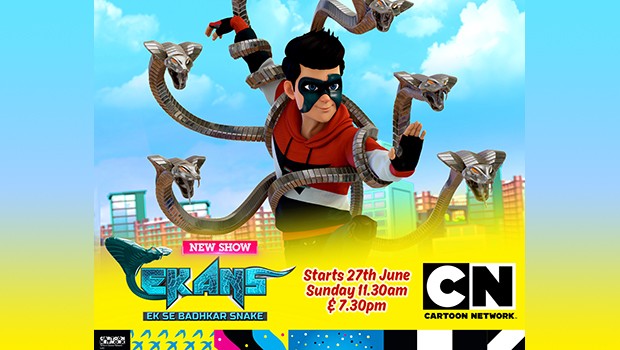 Cartoon Network, a WarnerMedia Kids channel, has announced the release of its first local sci-fi superhero CGI series, ‘Ekans - Ek Se Badhkar Snake’. It will be aired on the channel starting Sunday, June 27, and from Monday to Friday, at 11:30am and 7:30pm.

The all-new animated series features a 13-year-old street-smart wunderkind, Ekans, who is chosen as ‘the one’ and is gifted a ‘naagmani’ by the  most powerful snakes, thanks to his heart of gold and fearless attitude. With extraordinary snake-like powers, the otherwise conventional tech-savvy youngster obtains heightened sensory perceptions, ability to camouflage, flexibility, and strength to keep humanity safe from the evils of the world. That’s not all; his trendy hi-tech superpower suit with mechanical snakes gives him additional abilities to cleverly outsmart villains.

This original IP has a gripping storyline that meshes an urban setting with fantastical elements. It centres around the lives of Ekans, his genius family and goofy friend Chiku. While he is aware of his superpowers, he is compassionate and that makes him oh-so-lovable! This series brings to Cartoon Network fans the right dose of superhuman powers, friendship, humour and the support of a loving family.

Abhishek Dutta, South Asia Network Head for Cartoon Network and companion channel Pogo, said, “We are thrilled to introduce our first ever original homegrown superhero. It’s also our first-ever CGI series. ‘Ekans - Ek Se Badhkar Snake’ has a character-verse that is locally relevant and resonates universally. The show not only brings entertaining, action-packed adventures with new-age gadgets, but also encourages kids to wholly embrace themselves – just as Ekans does. We’re sure kids and their parents will love the show’s teen protagonist, because of his intelligence, unique superpowers, and his ability to overcome challenges and fears for the greater good.”

To build engagement among the audiences, Cartoon Network has also launched a high-impact, 360-degree integrated promotional campaign that celebrates the superhero in every kid. As part of this campaign, the brand has launched an Instagram page @EkansOnCartoonNetwork dedicated to the superhero. Cartoon Network will collaborate with various partners such as digital parenting platform Momspresso and YouTube Kids sensation ‘The Aayu-Pihu Show’, for engaging activities on social media. The promotional efforts for #EkansOnCartoonNetwork also include brand integrations, influencer engagement, branded content opportunities, affiliate marketing, in-app mobile game advertising and exciting activities on Cartoon Network’s official website and social media pages.