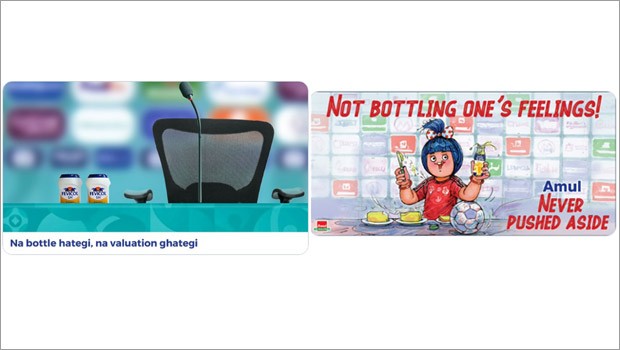 The Gujarat-headquartered brand, which has been aggressively promoting its milk product, released a new creative on Thursday in its trademark style.

The new creative features the Amul girl holding a bottle of Amul Kool in one hand and Amul Butter in the other.

The creative says ‘Not bottling one's feeling, never pushed aside’.

GCMMF's (Amul) Managing Director RS Sodhi shared the new Amul creative on Twitter on Thursday with a caption 'About beverages and football'.

About beverages and football... pic.twitter.com/zXIzLfMvQV

In a press conference on June 15, Portugal football captain Cristiano Ronaldo pushed aside two bottles of Coca-Cola in front of him and waived a bottle of water at the cameras.

The incident sparked a global discussion on the unhealthy nature of aerated cold drinks.

While the move saw Coca-Cola’s share price drop from $56.10 to $55.22 on the same day, the beverage company said “everyone is entitled to their drink preferences” in its reaction to the incident.