The family entertainer was one of the top five premieres on TV in the last 12 months. The movie marked its place in the all-time top 25 films that delivered 1crore+ impressions on its premiere 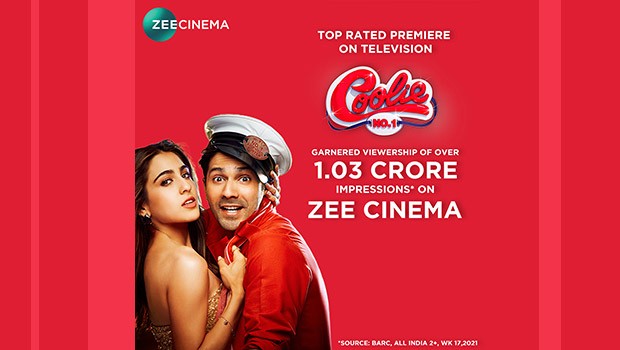 The World Television Premiere of Coolie No.1 on Zee Cinema received an amazing response from viewers, garnering a viewership of over 1.03 crore impressions, as per BARC data for Week 17, all India 2+ audiences.

The viewers’ love and support made the Varun Dhawan and Sara Ali Khan starrer light-hearted family entertainer one of the top five premieres on television in the last 12 months. Adding another feather to its hat, the movie marked its place in the all-time top 25 films that delivered 1crore+ impressions on its premiere. The movie premiere captivated the young target audience with Mumbai, Delhi and Maharashtra being the top markets.

Through the pandemic, the TV premiere ratings of the new releases were affected and hence the appreciation for the Coolie No.1 premiere on Zee Cinema is welcome news for the industry. Lately, some other movies that originally released on OTT such as Ludo, Gulabo Sitabo, Shakuntala Devi and Chhalaang also premiered on TV. But only a few films have been successful in the last one year.

The significantly high viewership numbers of Coolie No.1’s premiere reaffirm the strength of television as a medium in India. Zee Cinema is all set to further showcase some of the biggest titles in the coming months. The viewers can enjoy watching these big-ticket movies from the comfort of their homes.