The recipient of the third-highest civilian honour Padma Bhushan in 2016 was the Chairperson of Bennett, Coleman & Co. Ltd since 1999 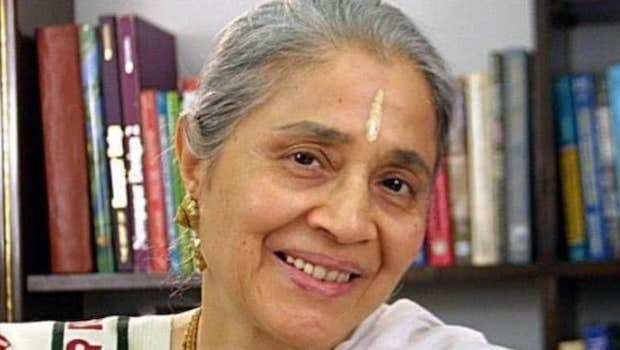 She is survived by two sons – Samir and Vineet Jain.

Indu Jain took over as the company chairman in 1999 after the death of her husband Ashok Jain, the owner of Bennett, Coleman and Company Limited.

She also headed the board of trustees of Bharatiya Jnanpith Trust, founded by her father-in-law Sahu Shanti Prasad Jain in 1944, which confers the prestigious Jnanpith Award for literature.

She breathed her last in Delhi.

After becoming chairman of the Times Group in 1999 she evolved a distinctive leadership style, characterised by compassion and inclusiveness, that helped propel the group to new heights.

She set up The Times Foundation in 2000, with sustainable development and transformational change as its key goals. One of India's most respected non-profits, it provides community services and runs the Times Relief Fund to offer assistance during cyclones, earthquakes, floods, epidemics and other crises.

She was the founder president of FICCI Ladies Organisation (FLO), established in 1983 to promote entrepreneurship and professional excellence among women in India. From 1999, she also served as chairperson of Bharatiya Jnanpith Trust, founded in 1944 by Sahu Shanti Prasad Jain, her father-in-law, to promote literature in Indian languages.

The Jnanpith Award, conferred by the Trust annually, is acknowledged to be the most prestigious honour for authors writing in Indian languages.

She was also the guiding force behind the Oneness Forum, launched in 2003 to promote unity in the world. The MahaviraMahatma award was instituted under the aegis of the Forum to promote Mahatma Gandhi's principle of ahimsa (non-violence).

“Saddened by the demise of Times Group Chairperson Smt. Indu Jain Ji. She will be remembered for her community service initiatives, passion towards Indias progress and deep-rooted interest in our culture. I recall my interactions with her. Condolences to her family. Om Shanti,” tweeted Prime Minister Narendra Modi.

A lifelong philanthropist, one of her last wishes was to donate her organs. Sadly, the complications caused by coronavirus meant that the wish could not be fulfilled, the sources said.

In 2000, she also addressed the United Nations at the Millennium World Peace Summit.

As chairperson of Bennett, Coleman & Co. Ltd, which owns the Times of India newspaper, she is credited with infusing new energy into the growth of India's largest media house.