Co-presented by Chocoliebe Eclairs and Cue Learn along with associate sponsor Britannia Tiger Krunch, the animated version will premiere on May 31. #ThankYouForBeingDabangg campaign will honour the country’s police force for working relentlessly during the pandemic 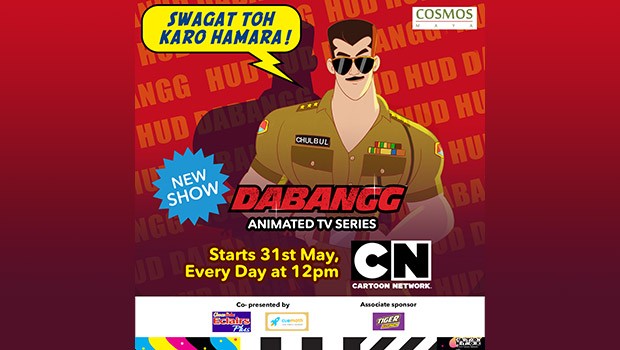 Cartoon Network, a WarnerMedia kids’ channel, is set to regale its young fans in India with its latest action-comedy ‘Dabangg – The Animated Series’ starting May 31, every day at 12pm.

The WarnerMedia and Cosmos-Maya collaboration will be one of the first animated series to retain the original version of a popular Bollywood character rather than reimagine the star as a kid. It joins the Cartoon Network line-up after the resounding success of other homegrown comedies ‘Titoo – Har Jawaab Ka Sawaal Hu’, ‘Smashing Simmba’ and ‘Lambu-G Tingu-G’ on companion channel Pogo.

Marking the launch of this latest homegrown IP, inspired by one of Bollywood’s most celebrated super-cop franchises, Cartoon Network is also launching a #ThankYouForBeingDabangg campaign. This unique initiative that celebrates India’s unstoppable cops, #ThankYouForBeingDabangg invites kids from across the country to express their gratitude through handwritten notes, videos, and messages for our police force and their incomparable efforts during the pandemic.

Abhishek Dutta, South Asia Network Head for Cartoon Network and Pogo, said, “Both kids and their families are just going to love this! Our new animated action-comedy is just so much fun and stars the character Chulbul Pandey – the quirkiest cop in town. It’s been great to work with Cosmos-Maya for yet another highly-promising project.”

He added, “Through the #ThankYouForBeingDabangg campaign, we also want to take this opportunity to recognise the constant endeavours of the police force during the Covid pandemic. We encourage our fans and parents to partake in this initiative and showcase their gratitude.”

Dabangg movie producer and Bollywood actor Arbaaz Khan, said, “We are thrilled to associate with Cartoon Network and Cosmos-Maya to bring to kids their favourite action-packed Bollywood franchise in an animated avatar. It has been a joyride to create new narratives with Chulbul Pandey, who the country has come to know and love. We cannot wait for little fans and their parents, to meet the animated version of the quirky and amazing Chulbul Pandey on Cartoon Network!

“I am also immensely proud to be associated with #ThankYouForBeingDabangg, with Chulbul at the forefront of this initiative by Cartoon Network, to celebrate the immense hard work, bravery, and dedication of India's police force in the challenging times of the pandemic."

‘Dabangg – The Animated Series’ is co-presented by Chocoliebe Eclairs and Cue Learn along with associate sponsor Britannia Tiger Krunch.