The day will also witness two other blockbusters of Khesari in the afternoon bands. Deewanapan will be telecast at 12 noon followed by Sajan Chale Sasural 2 at 3 pm 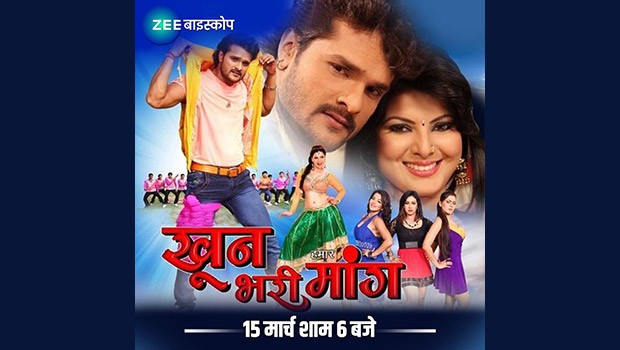 Bhojpuri movie channel Zee Biskope is coming with a special world television premiere of Khesari Lal Yadav’s blockbuster Khoon Bhari Humaar Maang on March 15 at 6 pm. The occasion is the birthday of the superstar.

An actor and singer at par, Khesari has bagged several accolades across film award platforms. He also made his appearance beyond Bhojiwood in reality shows at a national level. He became the romantic icon of the industry. The superstar initiated his journey with Zee Biskope as one of the channel’s launch brand ambassadors, after which the brand has celebrated Bhojiwood’s most romantic idol through various initiatives, including showcasing some of his biggest blockbusters.

The movie features Khesari along with actresses Smriti Sinha, Pakkhi Hegde, Monalisa, Anjana Singh and Subhi Sharma in prominent roles. This story showcases how three friends find strength in each other and decide to take a stand for their rights. Khesari is in a prominent role, helping the women brigade in their fight against all the wrongdoings.

The day will also witness two other blockbusters of Khesari in the afternoon bands. Deewanapan featuring Khesari Lal Yadav and Kajal Raghwani will be telecast at 12 noon followed by Sajan Chale Sasural 2 featuring Khesari, Akshara Singh and Smriti Sinha at 3 pm.

Samrat Ghosh, Cluster Head East, Zee Entertainment Enterprises Ltd., said, “Our viewers are our big extended family and we take immense pride in being a consumer-centric brand that brings them hyperlocal entertainment which is close to their hearts. High viewership WTPs, especially with a starcast like Khesari Lal Yadav, serve as a great opportunity for brands as well as our viewers.”

Amarpreet Singh Saini, Business Head, Zee Biskope and Big Ganga, said, “Khesari Lal Yadav being a superstar in the region has been ruling audience’s hearts for years. Presenting one of his best performances, a cult film for cinephiles, on his birthday is the grandest way to celebrate his big day. It’s a film that will not just entertain the viewers but will also give them a sense of celebrating their superstar’s birthday.”