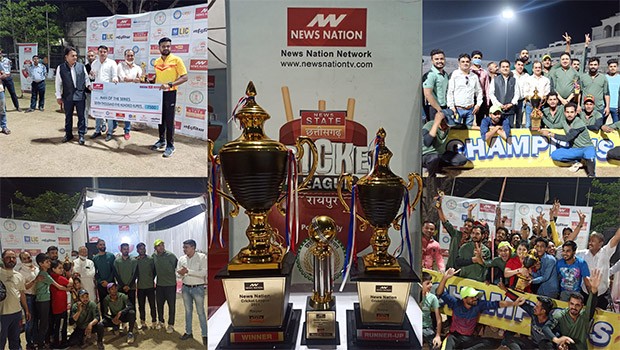 News State Chhattisgarh Cricket League commenced on March 5 and culminated on March 18, 2021. It was a 14-day league with 27 matches. It was inaugurated by Ravindra Choubey, Cabinet Minister, Chhattisgarh Government, and Aizaj Dhebar, Mayor of Raipur Nagar Nigam.

The closing ceremony was attended by the Home Minister of Chhattisgarh Tamradhwaj Sahu, and the Senior Superintendent of Police, Raipur, Chhattisgarh Police, Ajay Yadav. The league was a huge success with the participation of over 16 teams from different industries. It was very well appreciated by the local people of Raipur and demanded a second season to happen soon. The league champions were S A Rubber Industry and the team was delighted to receive the winner title from the Home Minister.

Thanking the event sponsors, Abhay Ojha, President- Sales & Marketing – News Nation Network, added, “We truly appreciate the generous support of our sponsors and partners for making this league a huge success. We have received a positive response and are planning to expand this initiative in other cities and on a much grander scale.”