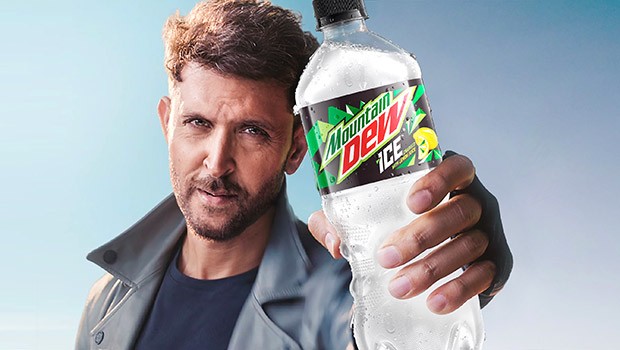 Mountain Dew Ice, the lemon juice-based fizzy beverage offering by PepsiCo India, has unveiled its first-ever TV campaign in India. The new summer campaign, featuring Bollywood superstar and brand ambassador Hrithik Roshan, offers the proposition of ‘Jeetne ki Aag aur Thanda Dimaag’ and encourages one to embrace the spirit of adventure and keep a calm mind as they face fear with determination to win.

The ‘Made for India’ Mountain Dew Ice has been developed to suit the Indian palate and is a significant milestone in PepsiCo India’s journey of innovation in the beverage category.

The film opens with Hrithik Roshan contemplating a world record-breaking bike stunt. Fear is visible on the actor’s face as he evaluates the choice in front of him. A resolute look crosses his face as he takes a sip of Mountain Dew Ice and takes the challenge head-on. The powerful words ‘Har chunauti hogi paar, bas chahiye jeetne ki aag aur thanda dimaag’ help reiterate the brand’s philosophy of ‘Darr Ke Aage Jeet Hai’ or overcoming one’s fears to achieve great success.

The Mountain Dew Ice TVC will be amplified across TV, digital, outdoor, and social media with a 360-degree campaign. Mountain Dew Ice™ will be available in single/multiple serve packs across modern and traditional retail outlets as well as on leading e-commerce platforms.

Speaking about his experience shooting the TVC, Roshan, said, "This campaign for Mountain Dew Ice is as refreshing as its name suggests.  In time for summer, the TVC introduces the consumers to a 'chilling' experience. What is interesting is that it adds to the brand tagline - 'Darr ke aage jeet Hai' with the emphasis on being responsibly fearless. Mountain Dew Ice propositions 'Jeetne Ki Aag aur Thanda Dimaag', is a valuable slogan. It is a perfect mix of the product attributes along with a message in the public interest. That is as cool, as it can get!"

Vineet Sharma, Category Director, Mountain Dew and Sting, PepsiCo India, said, “We are very excited to unveil the first-ever brand campaign for Mountain Dew Ice. The launch of Mountain Dew Ice has been a significant milestone for us in our beverage category innovation journey. With the new campaign, we are taking the Mountain Dew core brand’s philosophy of ‘Darr Ke Aage Jeet Hai’ and giving it an ‘Ice’ twist. The idea is to inspire the youth that they can overcome any obstacles in their way if they just keep a cool mind along with the fire to win while facing  their fears head-on. We are confident that consumers will relate to the new campaign strongly and shower Mountain Dew Ice with the same love that our other campaigns for Mountain Dew have received over the years.”