Collaborates with Asianet to bring an ad-free movie viewing experience with films available all day long at Rs 1.5 per day. Brings in rock fusion band Masala Coffee to compose an original song and music video for the launch campaign 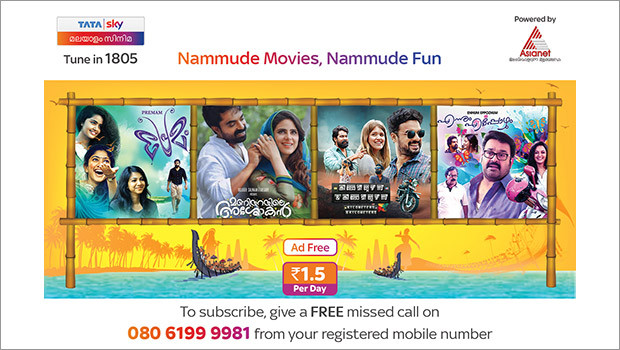 Bringing the flavour and legacy of Malayalam cinema on a single curated platform, Tata Sky Malayalam Cinema offers an uninterrupted movie-viewing experience to movie enthusiasts, capturing the spectrum of genres — action, romance, drama, and comedy on television. The service will showcase the biggest blockbusters of Mollywood with exclusive movie premieres before television. The library boasts of blockbusters like Maniyarayile Ashokan, Kilometers & Kilometers, Ambili, Drishyam, Keralavarma Pazhassiraja, Premam and Kali among others, featuring the biggest stars such as Mammootty, Mohanlal, Dulquer Salmaan, Soubin Shahir, Sai Pallavi, etc. Tata Sky Malayalam Cinema is now available to all subscribers on #1805 (SD) at a minimal cost of Rs 1.5 per day.

Pallavi Puri, Chief Commercial and Content Officer, said, “Movies contribute more than 20% to the overall TV viewership in Kerala and that itself indicates the tremendous affinity Malayalam-speaking audiences have for their cinema. With regional content becoming the key driver of viewership, the launch of Malayalam Cinema is an extension of this trend. Our new service will deliver an uninterrupted flow of the best movies to ensure an enjoyable TV viewing experience for the subscribers. We are delighted to collaborate with Asianet to make this service come alive for our subscribers.”

“Over the years, Asianet has forged a special place in the hearts of Malayalam-speaking audiences. We always strive to identify new ways to take our rich and engaging content offering to newer viewers and are delighted to work with Tata Sky to launch this new service,” said Kevin Vaz, CEO, Infotainment, Kids and Regional Entertainment Channels, Star & Disney India.

Tata Sky also collaborated with South India’s popular rock fusion band, Masala Coffee. Known for their folk fusion mixes and compositions for films like Uriyadi and Dulquer Salmaan-starrer Kannum Kannum Kollaiyadithaal, Masala Coffee’s original composition for Tata Sky Malayalam Cinema is a Nadan Pattu folk-style peppy and upbeat number that is bright and cheery and brings out the perfect essence of the offering.

Commenting on their association with Tata Sky, the band said, “We are thrilled to have teamed up with Tata Sky for the launch of their new service Malayalam Cinema. We had a great time creating the track which is a unique type of a local folklore known as Nadan Pattu which celebrates the spirit of Kerala. The service offers some exciting set of titles and we are eagerly looking forward to it.”