With special access to military personnel and systems, the channel brings the glimpses of an action-packed 24 hours with the defenders of India 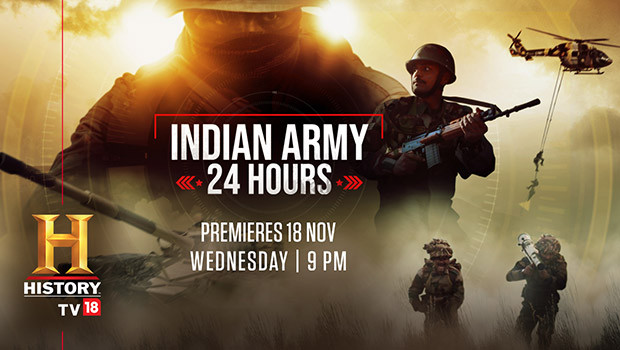 From the burning sands of Rajasthan to the freezing glaciers of Siachen, the boundaries of India stretch over some of the most extreme terrains on the planet. Regular ceasefire violations and infiltration attempts from across the border mean that protecting the world’s seventh-largest country, from remote outposts to thriving urban centres, is incredibly daunting. But the men and women of the Indian Army are up to the task. With special access to military personnel and systems, HistoryTV18 brings you glimpses of an action-packed 24 hours with the defenders of India. ‘Indian Army 24 Hours’ premiering on November 18 at 9 PM, follows a 24-hour clock, tracking teams, tactics and technology at work.

This superbly researched and narrated one-hour film encapsulates what it takes for one of the largest armies in the world to stay vigilant and battle-ready every minute of every day. Featuring power-packed real-life action sequences and dramatic recreations of battle-scenarios, the show takes viewers into the thick of military operations. It presents little-known historical facts about the Indian Army, spotlights some of its greatest battle honours and sheds light on the functioning of various units, intercut with interviews of dynamic young officers of the Indian Army.

The one-hour special also reveals some of the operational challenges specific to the various arms of the Indian Army, including the Armoured Corps, Engineers, the Signals Corps, Army Aviation, and the elite Special Forces.

HistoryTV18’s ace camera crew takes viewers as close to the explosive action as possible, for an authentic experience of the Indian Army’s relentless efforts, efficiency and preparedness in extreme conditions. From the hallowed ground of the prestigious Indian Military Academy to the icy heights of the Siachen glacier; from inside a Bofors artillery unit to a chopper carrying fearless Ghatak commandos, and much more.

The film’s 24-hour clock starts a little after midnight with a border patrol near the LoC and then a daring commando-raid behind enemy lines. The tense, suspenseful opening follows a squad of elite Paratrooper Special Forces as they neutralize two high-value terrorist targets. As dawn breaks, the narrative transitions to vignettes of the various arms of the Indian Army, filmed in all their realism, with live explosions and gunfire. As the day in the film progresses, the audience becomes privy to high-tech intelligence gathering and comms, with the men and women of the Signals Corps. There are eyes in the sky and boots on the ground as drones take flight and stealthy teams move undetected on foot. We also see how the Indian Army’s Engineers keep men and material moving, no matter the obstacle. Tracks are laid over desert terrain, minefields are cleared, and a battle tank with engine trouble is rescued, while in range of enemy fire. Elsewhere, a spectacle of awesome firepower unfolds with a tank column firing on-the-go, while raw courage is on display as an infantry detachment charges into the mouth of battle, guns blazing and khukris unsheathed, in another remarkable recreation.

‘Indian Army 24 Hours’ also takes viewers behind the guns and glory, to see the gutsy, unseen heroes at work. Their courage and dedication shine through, however dire or dangerous the situation. From the soldiers who deliver meals to brothers-in-arms at forward posts and the logistics warriors who keep storage depots stocked; to daring pilots who save lives with emergency evacuation and field medics and doctors, who hold fast to the motto, Sarve Santu Nirmaya, the film celebrates all heroes in uniform.

The film’s finish packs a punch. As night falls, the story comes full circle with a commando team using the cover of darkness to infiltrate enemy lines. Cameras follow as the special forces’ operatives are air-dropped on the edge of the enemy-controlled territory, in the dead of night. Their mission - to blow up an ammunition dump.

Avinash Kaul, Managing Director A+E Networks | TV18 and CEO-Broadcast for Network18, said, “Indian Army 24 Hours is a must-watch for anyone curious about or fascinated by the Indian Army. This film is the story of the soldiers of our army and showcases their bravery, effectiveness and unwavering commitment to the defence of our nation and way of life. HistoryTV18 is honoured to have made this film with the support of the Indian Army. We hope that the film inspires in our audience the same sense of pride and admiration for our true heroes that we felt in making it.”