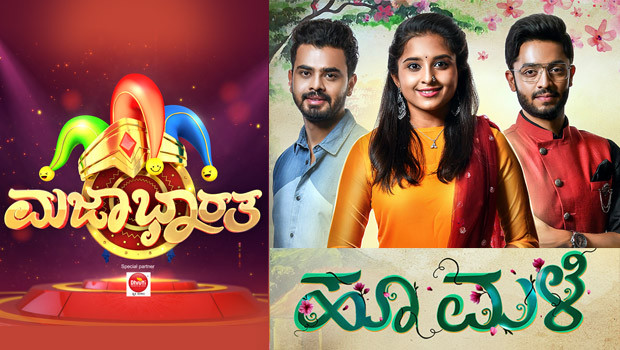 With a new brand ethos, ‘Banna Hosadagide, Bandha Bigiyagide’, Colors Kannada from Viacom18 summarised the channel’s refreshed and strengthened spirit. The Kannada general entertainment channel is strengthening its primetime line-up with the addition of two new shows to its slew of offerings to spread love and humour among its viewers.

The channel will launch two new shows,‘Majaa Bharatha- Season 4’ and ‘Hoo Male’, in the non-fiction and fiction category, respectively. ‘Majaa Bharatha- Season 4’ is set to go on air on November 7 at 9 pm and will air over weekends. ‘Hoo Male’, an unpredictable story of ambitions and emotion, will go on air from November 16 at 9 pm and will air from Monday to Friday.

Parameshwar Gundkal, Business Head, Kannada Entertainment Cluster, Viacom18, said, “Colors Kannada has always been ahead of the curve in the Kannada entertainment space. We have focused on telling stories in the most compelling and relatable manner which our viewers can resonate with. With our new brand ethos, we innovated and adapted to the new normal by resuming content of our existing shows, despite the challenges. We are delighted to yet again be ahead of the curve to satiate entertainment needs and air our new shows ‘Majaa Bharatha- Season 4’ and ‘Hoo Male’ to spread humour and love amid these challenging times. With renewed energy and excitement, we are hopeful that these shows will surely make an impact in the 9 pm primetime slot.”

With Dhruti Masala as a special partner, now in its fourth season, ‘Majaa Bharatha, a comedy talent show, will provide Kannadigas with an opportunity to entertain viewers with epic comedy content. Hosted by Bhoomi Shetty, the participants will be judged by Kannada music director and singer, Gurukiran and actor, Rachita Ram. Actor Harshit Raj too will showcase his comic skills in a never-seen-before avatar.  ‘Hoo Male’, on the other hand, is a fiction show centred around college-going Lahari, who is the only daughter to a single mother with serious political ambitions. The story revolves around Lahari’s secret love affair and her mother’s attempt to get her married to a highly influential politician who is a widower with a child.

With the launch of these two shows, Colors Kannada strengthens its 9 pm primetime slot. In addition to this, on October 31, the channel launched a new show celebrity cookery show, ‘Chat Corner’  powered by Goldwinner Cooking Oil, India Gate Basmati Rice, Aachi Gulab Jamun Mix and with TTK Prestige Swach Pressure Cooker as a Special Partner, which is being aired at 12 pm on Saturday and Sunday.